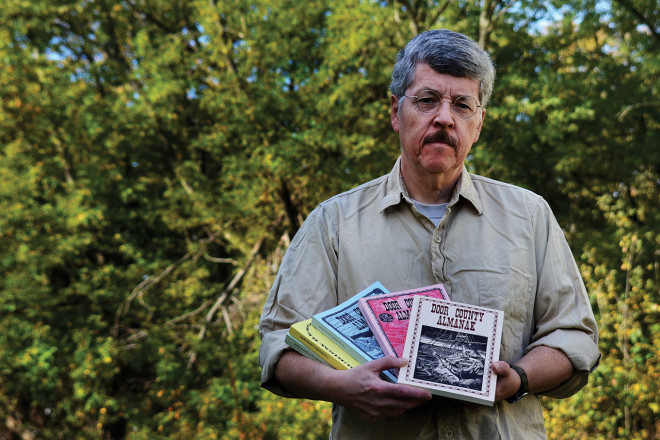 Door County readers are familiar with the iconic Farmer’s Almanac and Benjamin Franklin’s classic Poor Richard’s Almanac, but unless they were turning pages during the 1980s, they may not be aware of the Door County Almanak phenomenon.

Five theme-based volumes of the Almanak appeared during that decade, the first in 1982 and the last, 1990. But while the traditional weather forecasts, planting dates, and times of tides and sunrises and eclipses are excluded, miscellaneous information abounds:  articles dealing with people, events, and history connected with Door County; local recipes, poetry, fiction, artwork and photography. 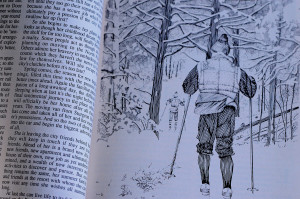 “It’s not technically an almanac,” said the series editor Fred Johnson of Sister Bay. “It has an assortment like one, but it’s not a real almanac.”

The project began in 1981 with Johnson, Kevin Combes, and Pat McNamara. “I had wanted it to be a literary magazine,” Johnson said. He had produced two handmade books with original etchings and artwork while a graduate student at the University of Wisconsin – Madison studying graphics and film, specializing in etching and printmaking. He learned to hand set lead type and chose the name Dragonsbreath Press for his press.

“An almanac was Kevin’s idea,” he continued, and the Door County Almanak was born, with Johnson and Combes sharing duties as publishers, Johnson and McNamara, as editors, and Combes as art director. With the general theme shipbuilding, 18 writers (including this author), 10 artists, and two photographers contributed their work.

“I like books and magazines from the turn of the 20th century,” Johnson said, “the literary and arts magazines, the arts and craft style.” And by choosing the archaic spelling almanak and printing the title using an old wood type from a Washington hand press dating from about 1890, he evoked that old-time style, one that was carried throughout with woodcut illustrations, black and white photos and prints, and buff “pulpy” paper.

But after volume one, Johnson continued the project as sole editor with Lon Kopitzke (then owner of the now defunct Door Reminder) as publisher. The second and subsequent publications appeared under the Dragonsbreath Press imprint, revived from Johnson’s university days. Orchards was followed thematically by fishing, farming, and tourism/resorts. Each publication maintained the appearance of the first, suggesting an earlier era, but timeless in its treatment of subject matter.

The series continues to intrigue readers. Bookseller Steve Grutzmacher noted, “Every year I get 10 to 20 individuals who ask why it isn’t still being done, people who like the books and find them interesting.” But both Grutzmacher and Johnson acknowledged the fact that continued publication was not fiscally realistic.

A major factor, Johnson noted, is the fact that “so many books are published now about Door County. There’s a lot of competition!” 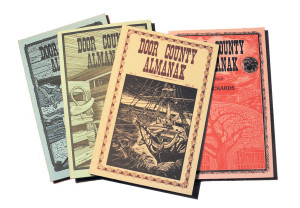 While the fifth volume has essentially sold out, back issues of the first four are still available. Gruztmacher continues to offer them for sale in his Sister Bay Passtimes Books. “Some people want to fill in their set,” he said.

Wm. Caxton Ltd. bookstore in Ellison Bay and the Corner of the Past (Sister Bay Historical Society) also sell the books. Used copies are available online.

Johnson believes that his collection of Door County Almanaks supplements the historical contribution of Hjalmar Holand’s Old Peninsula Days (c. 1925). “People always liked them, and still bring them up, and re-read some of the articles” using them as a reference.