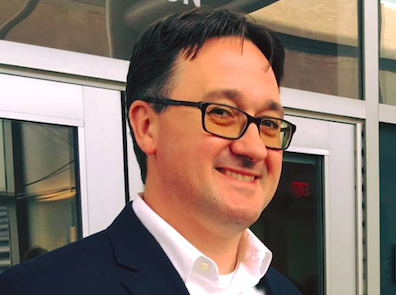 Jeremy Kodanko, an associate professor and associate chair in the Department of Chemistry at Wayne State University in Detroit, has a research lab focused on organic, inorganic and medicinal chemistry. Submitted.

If you’ve ever wondered what cancer research looks like, it’s a lot brighter than you might think.

Jeremy Kodanko, an associate professor and associate chair in the Department of Chemistry at Wayne State University in Detroit, has a research lab focused on organic, inorganic and medicinal chemistry.

One aspect of his research there focuses on light-activated therapeutics: anti-cancer drugs that are activated using light. These drugs are nontoxic in the absence of light and toxic when activated by shining a light over a certain region of the body. Through this process, doctors can target cancerous tumors while leaving the rest of the body alone.

Kodanko’s love of research began at the University of Wisconsin-Madison, where he did research as an undergraduate for three years and confirmed his passion for organic chemistry. It was an invaluable experience to work with PhD chemists in the lab, but at the time, he didn’t realize he was capable of one day earning his own PhD.

Kodanko’s more basic love of science started when he was in high school at Sevastopol. He realized he enjoyed chemistry and was good at it, and his teacher served as a great role model.

“My most important experience at Sevastopol and in my early education was taking chemistry with Doreen Carmody,” Kodanko said. “I feel very fortunate to have learned chemistry from her.”

After graduating from Sevastopol in 1993, he intended to pursue engineering instead of science and studied in a program at the University of Wisconsin-Green Bay for two years. While there, he took an organic chemistry class that ended up changing the course of his academic career.

“This is a class that I think 95 percent of people hate and dread, and it’s kind of a weed-out class for students in medical school,” Kodanko said.  “But for whatever reason, I had a knack for it, and I really enjoyed organic chemistry.”

Through all of the chemistry and biology classes he had taken up to that point, Kodanko had become interested in the development of new drugs. That led him to UW-Madison, where he applied to the pharmaceutical sciences program. After working intensely in the lab for three years, he switched his major to chemistry and graduated in 1998.

“I loved research,” Kodanko said. “I couldn’t believe that after my third year of college, somebody was actually going to pay me to do this kind of stuff.”

He credits his strong work ethic to growing up in Door County and working — often at restaurants — to support himself in college.

“That was very key to being successful in research early on,” he said.

Kodanko continued his education at the University of California-Irvine, where he spent five years studying organic chemistry, but becoming interested in other types as well. It was there that he became inspired by the chemistry that occurs in nature. That interest took him to a lab at the Massachusetts Institute of Technology for three years, supported by a postdoctoral fellowship, and he worked more with biology and organic chemistry.

Today Kodanko runs his own lab and continues to do research such as the light-activated therapeutics work with graduate students. He teaches graduate and undergrad classes, and as associate chair and director of graduate studies, he oversees the success of the department’s 150 graduate students. He also works through the challenges of maintaining the lab’s funding.

Even with all of these responsibilities, community outreach has been an important part of Kodanko’s career. He’s helped prepare middle school students to compete in the You Be the Chemist Challenge, for example, and some had success at the regional and state competitions.

“I try to stay active in that area. It’s challenging with being a faculty member, teaching, doing research, doing service and then having a family on top of that,” he said. “I wish I could do more.”

When reflecting on his education, he’s grateful to have studied at several universities with other highly intelligent individuals, and he said he’s proud to have gone from being an undergrad at Green Bay to a postdoc at MIT.

To upcoming Door County grads, Kodanko would say something that his grandmother instilled in him as a child: “The most important thing — and I tell young people this all the time — is to pick something you love,” Kodanko said. “She always told me how important it was that I find something to do that I really loved. That, I think, is my best advice.”

When he’s not teaching or in the lab, he’s spending time with his wife and two kids on their sailboat and — naturally — supporting the Packers.