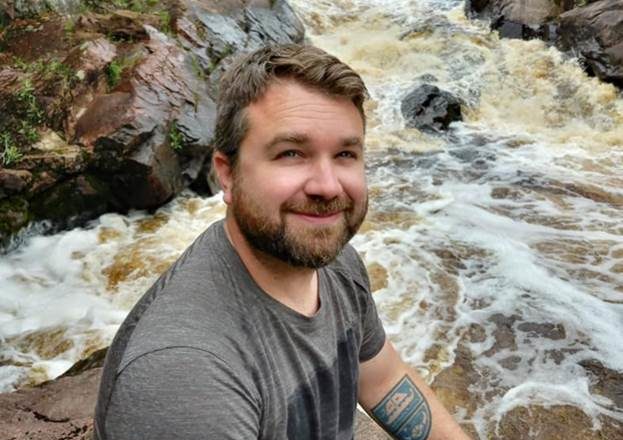 Finding His Way Back Home through Nature

Jesse Koyen, a 1999 Washington Island graduate, went from being a student in a class with eight boys, to earning his master’s degree in Massachusetts, to finding his way back home.

Many of his favorite life experiences have taken place outside, which led him to his current position as stewardship director for the Door County Land Trust – but it took a while to get there.

Growing up on Washington Island was a family affair: Koyen is part of the sixth generation of Islanders on his father’s side, and his mother’s father relocated his family there from outside of Chicago when she was a young teen.

Koyen’s parents built the the Koyen Collection – K.K. Fiske Restaurant, Granary Saloon and Coop Hangout – in the ’80s. (The bar followed in 2000.) The children grew up in the service industry. Koyen’s father, Ken, is also the last commercial fisher on Washington Island (and he’s still fishing), so Koyen helped him, too.

It was impossible not to know everyone in the community.

“It’s so small and isolated that you have to be friends with everyone,” Koyen said. “Every age range – you know how to talk to people who are eight or 80. You have friends of any age.”

Check out this video from Peninsula Filmworks on behalf of Destination Door County, where Koyen takes Matt Stone on a tour of some of his favorite Land Trust areas.

He received as much attention at school as he did with his family. There was a lot of dedicated time in such a small class, so he said it was a great place to learn. He later became valedictorian.

Despite the class size, Koyen was able to play soccer and basketball. The team wasn’t large enough to play the other schools in the county, so it competed against charter and religious schools. For away games, the team had to stay at hotels because the ferry didn’t run late enough.

When Koyen wasn’t working at the restaurant, fishing or playing sports, he was outside.

“I was always outside, pretending a tree was a spaceship or something when I was a little kid with my brother and cousins,” he said.

He went to the University of Wisconsin-Oshkosh and UW-Green Bay for business or psychology but found out that he didn’t like either one. He returned to the Island for a few years to continue working at the family businesses and did some organic farming and construction.

Seven years passed before Koyen decided to return to school. He earned a double major in wildlife ecology and environmental studies from UW-Madison in 2013.

“I don’t know why I didn’t realize it earlier,” he said. “I was outside all the time and really enjoyed it. Animals and wildlife were always really important to me.”

Returning to school gave Koyen a chance to do something for himself.

“It was easy to go back and work for the family businesses, and even if I took a leadership role, it wasn’t necessarily my dream,” he said.

Koyen intended to become a wildlife biologist, but after working in several labs during school, he realized research wasn’t the route he wanted to take – he was too used to hands-on work.

He thought that if there were a way to work with wildlife, it was best to start with the land, so he worked at a land trust in Massachusetts through AmeriCorps.

After two years, Koyen went to graduate school at the University of Massachusetts-Amherst, earning a master’s degree in sustainability science, with a concentration in water sustainability and climate change in 2017. He was in an accelerated program in which he completed a research project and 38 credits in two semesters. It was a lot of work all at once, and it took its toll.

“The program director said he would never again allow anyone to do that,” Koyen said.

Living in the Northeast wasn’t easy for him either. It was a beautiful area, but the people were much different. He still made great friends and even met his future wife, Sam.

When it was time to apply for jobs, the Door County Land Trust happened to have an opening. It was only a seasonal position, but Koyen needed the experience. He returned to the county and was later offered a full-time position.

Koyen is now transitioning into the stewardship-director role after being offered the position in January. He’s still assisting with applications for grants for land acquisition, but he’ll be spending more time outside and managing the 4,500 acres of land that the trust owns, overseeing trail management and native plantings and monitoring invasive species.

“There are the two sides: the people side of interacting with the land, and then managing the habitat for wildlife and clean water,” he said.

It was hard for Koyen to figure out what he wanted to do in life, especially when many of his friends and family members knew what they wanted right out of high school. But he figured it out, and two of his biggest accomplishments so far have been taking the leap to return to school and finding full-time work in his field.

Koyen and his wife, Sam – a conservationist with Door County Soil and Water – bought a house in Sturgeon Bay last summer, were married in November and are taking care of their new puppy. There’s been a lot of “adulting” going on, he said, but he’s right where he wants to be.

“To be back home and to be doing something full time that I love is a big deal,” Koyen said.