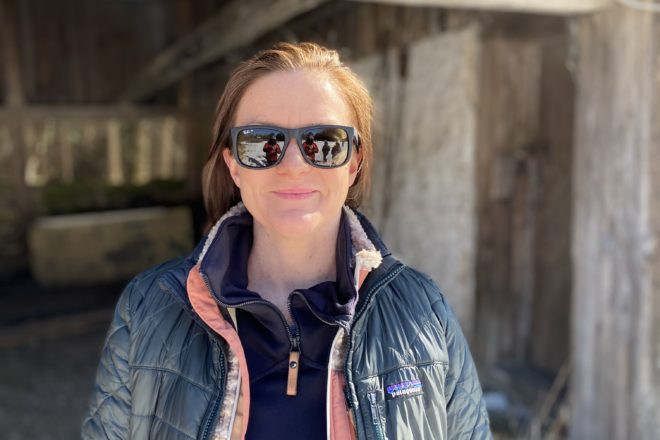 To suggest an alumnus or alumna to profile, email [email protected] To learn more about Alumni Door County, visit alumnidoorcounty.org.

Even after living in France for a short time, 1997 Gibraltar graduate Lillie Conrad decided to come home to Wisconsin to become a corporate attorney – and her French still comes in handy.

Conrad grew up in the deep country of Door County, somewhere in between Baileys Harbor, Fish Creek and Ephraim, she said. Her father lived in the Cayman Islands, so she also spent some time going back and forth between the two places.

She said her experience at Gibraltar was very positive: She had a core group of friends that was really her whole class, as well as supportive teachers. She participated in mock trial and also spent her senior year in France as an exchange student.

Conrad said she didn’t have much rhyme or reason for pursuing her undergrad degree at UW-Madison, where she studied French, international relations and political science. Also at UW-Madison, she earned her master’s in French and European Union studies and was able to do an internship in Paris with a government agency. From there, she attended Marquette University Law School in Milwaukee.

Conrad always knew that she wanted to be a lawyer, but also that she would thrive in a business setting. So instead of working at a law firm, she became an in-house attorney at Kimberly-Clark in Appleton, where she looks out for the legal needs of brands such as Kleenex and Pull-Ups when working on projects for product launches. It’s been the middle ground she was seeking for the past 12 years.

“Sometimes we are resolving issues as well, but more of it is forward looking than backward looking,” Conrad said.

For the past four of those years, Conrad has switched her focus to all things privacy and digital, she said.

When asked how she’s able to move among different departments, she said, “You try to bring yourself along as much as you possibly can and ask a lot of questions every single day. Every day I’m learning something new. I’m never afraid to be the one to raise my hand to say I don’t understand.”

Conrad has been able to work on larger issues that have been very meaningful to her, though they might not directly fall within her area of expertise – things such as women’s rights and unconscious-bias awareness within the company, she said, which she views as some of her biggest accomplishments.

Conrad’s day starts with getting her nine- and 11-year-old kids ready for school. When she gets to the office, it’s meetings, meetings, meetings. Because she’s working with clients who are located all over the world, sometimes she has to be on the phone early in the morning or late at night.

That’s where the challenging part of her job comes in: achieving and maintaining a work-life balance and being present wherever she is. It was especially hard to create that balance and keep things moving while she was having her kids.

“When I’m home with my kids, when they’re awake, I’m just 100 percent with them,” Conrad said. “I don’t want to be answering emails in that short period of time that I have with them in the evening.”

When she’s not working, she’s spending time outside and traveling with her family. She also “really loves drinking coffee.”