There is no doubt that Door County has a rich art culture, and within that, a thriving ceramic culture. Door County potters seem to have all found their own individual niche in the community, which is why it seems difficult to imagine Door County pottery without David and Jeanne Aurelius. The two are regaled fixtures in the Door County art scene, and their Ellison Bay gallery/studio, Clay Bay Pottery, celebrates 33 years of business in 2009.

“We met Sonja Juffer while we were both students at Luther College, and she was asked to create a mural at Lake Bluff Elementary School in Shorewood,” David explains. “She knew that we already made tiles, and the accessibility appealed to her – with a tile mural, all the students could have a piece of the involvement.” Having each student individually involved would take a lot of work, but both David and Jeanne said they were up for the task.

For that first project, the Aureliuses traveled down to Shorewood and gave a presentation on what their vision was. “It was a ‘Nature and the Neighborhood’ theme,” Jeanne says. “We thought it was important for the kids to have a sense of the neighborhood around them, and also what should be included in the mural.”

With the help of the Aureliuses, the students brainstormed and drew many, many pictures – over 650 of them. The mural evolved out of this process, and it’s the same process the Aureliuses use nearly 15 years later. To date the couple has helped plan and install 18 large murals, both in Door County schools as well as schools throughout the state of Wisconsin.

Of course, it sounds easier than it looks. Everything about the murals is a multi-step process, which has gotten easier since that first project in Shorewood, but it’s still no less work.

“For that first mural, David had to come down and make all 650 tiles with a slab roller,” Jeanne laughs. “And, we didn’t think to have any kind of grid for the project or mark any of the tiles, which caused us to have missing tiles to replace. Our process is a lot more streamlined now, but one mural will often take us the majority of the off-season to plan and create.”

So, while most artists yearn for a few quiet months of uninterrupted work in their studios, or retreats to places that give them a fresh perspective on their work, the Aureliuses are often packing up supplies and traveling back and forth from Door County to schools around the state. For their most recent installation in the town of Monona, the two artists had been meeting with school administration and parents since as early as May 2008. Here they gave their initial presentation and showed photos of other completed murals so the school community knew what to expect.

“It used to be that schools would ask us for a theme,” Jeanne says. “Now it’s the opposite. Many schools know what makes their communities special, and now they come to us with a theme.”

After that initial meeting, the couple went back to the school in late October (after the Door County tourism season was over) to give a presentation on the mural to the entire student body. After the presentation, the Aureliuses helped the children brainstorm on what they love about their community and what themes are important to them, which culminated in an all-school cafeteria “draw-a-thon.”

Out of this brainstorm, the idea for the mural – a map-like design entitled “You Are Here” – was born.

“Monona is a close-knit town, and with it being so close to Madison, it was obvious that the kids were both influenced by both the small community and the large city,” David says. 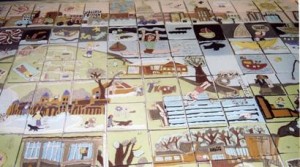 The couple went again in November and December to piece the drawings of the mural together, keeping their eye out for the themes and landmarks that were important to include.

The Monona mural was drawn out on grid paper by December 2008, with the couple going back to the school for an intensive two-week period in January 2009 of helping the children shape and paint their own individual tiles, something David and Jeanne like to call “shaking hands with clay.”

“Sometimes we go to schools where kids have never handled clay before, so they need to be taught a bit about how clay works,” Jeanne says. Parents and other community volunteers are usually on hand for this part of the process, as well as helping the kids glaze their tiles after the design part has been completed.

By the end of May 2009, the design will be completely finished and mounted onto a designated wall of the school, with a school-wide celebration being held that same month. For both David and Jeanne, this is very exciting.

“There’s such a feeling of pride in a project like this. These kids are part of something that will be in their school for years to come,” David says. He goes on to say that each tile placed in that mural has been touched by a least 10 different people throughout its creation, and that fact serves well as a metaphor for the project in general. “It brings people together, and it serves as a time capsule of that moment,” he says.

As I sit with the Aureliuses in their Ellison Bay home, we pour over 15 years of photo albums, chronicling all the murals they have helped to create. Photos upon photos reveal smiling faces of elementary students, principals, and parents – parties who are obviously reaping the benefits of projects such as these. The benefits are also there for the Aureliuses.

“We love working with the kids, and we appreciate the learning process – both the one they go through and the shared experience,” Jeanne says. “And, we get to work in a new city with new people. These projects keep our creative juices flowing.”

David and Jeanne Aurelius own Clay Bay Pottery in Ellison Bay. For more information about the gallery or about a tile mural project, please call 920.854.5027 or email [email protected].