“After the election, my friend Leesa Maxwell turned 50,” said Barb Luhring of the Sister Bay 3W Design Group. “She was in love with Barack Obama. For her birthday I drew an Obama paper doll with five outfits.”

When Luhring showed the paper doll to her hair stylist and confidant Deb MacDonald, she said, “Make a Web site and sell them!”

And, http://www.Mybarackobamapaperdoll.com was born; however, the gestation period extends back to when Luhring was a 10-year-old girl.

“I always paid a lot of attention to the news,” Luhring said. “My family in Manitowoc watched the CBS Evening News with Walter Cronkite, and I read Newsweek even as a little kid. When the U.S. Pueblo was taken by North Korea, I drew a cartoon with my character Gumby saving the day.”

As an art major at UW-Stout, Luhring drew political cartoons for the school paper. She showed her work to Gary Trudeau (creator of Doonesbury), Bill Sanders (Milwaukee Journal editorial cartoonist) and Nicole Hollander (creator of the comic strip Sylvia) and received encouragement for her skill as an artist; but, she was warned both of the future decline of editorial cartooning as a career and the difficulty of women breaking into the field.

“Nicole Hollander self-syndicated,” Luhring said, to circumvent the men-only field. “She’s a hero to me!” 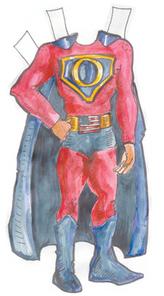 “I took a breather,” she said. “He was a democrat, but George W. Bush motivated me to do political cartoons again.” (Visit Luhring’s Web site, The Naked Ambition for the Ruling Class, at http://www.naotrc.com for a gallery of these cartoons along with Life As a Cartoon and Web site Humor.)

In 2002 Luhring entered a juried international show of women’s graphic humor in Ferrara, Italy. For the theme “No Woman Is an Island” she submitted her editorial cartoon Rub-a-dub-dubya that depicted Bush in a bathtub with King Abdullah and Pope John Paul, none of the three men in a tub a strong advocate of women’s rights.

Luhring was one of five American women admitted to the graphic humor show. She was in good company; two of them had won Pulitzers. At her husband Gregg’s encouragement, Luhring traveled to Italy for the exhibition. When she located her drawing, hanging next to it was one by Sylvia’s Nicole Hollander, her hero.

The week after the 2004 presidential election Luhring was featured in a graphic humor show at Mr. Helsinki’s.

“After the second election I got busy with our business,” she said. “I felt like I needed to take a break from editorial cartoons. I understood how the election happened, but I felt sad. I couldn’t immerse myself in it anymore.”

However she continued to draw. Her graphic story Tomboy Chronicles appeared in Other Voices: Works in Progress, Norb Blei’s 2007 anthology of prose, poetry and photos.

The 3W Design Group that Gregg and Barb Luhring own (taking its name from World Wide Web) creates Web sites for clients. The company began in 1995, the year that Barb and Gregg were among a local group who helped bring a Web presence to Door County. Others included John McMahon, Miriam Erickson, Dennis Skahen and Rick Gordon. 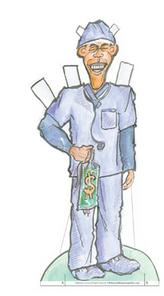 “We were asked to put together the graphics for the Web site,” Luhring said, “and Gregg handwrote the html for http://www.doorcounty-wi.com .”

Gregg Luhring has a degree in computer programming from the Madison Area Technical College.

“He continues to learn technology at warp speed,” Luhring said, “and I try to adapt it if it’s applicable to our client’s needs.”

One of 3W Design’s first customers was Whitefish Bay Farm, whose Web site allows them to sell sheep fleeces within 24 hours, and features a blog Eweturn.

Sarah Sawyer, another client, also “has a blog we set up,” Luhring said. “She’s into it; it reflects her business (the Egg Harbor Lodge), her personality, and highlights the community she lives in.”

But 3W Design also attracts clients from throughout the Midwest. http://www.Shimonlindemann.com reflects the work of Lawrence University art professors and professional photographers John Shimon and Julie Lindemann of Manitowoc.

“Their work has been shown in Milwaukee, Chicago, and New York,” said Luhring. “Their Web site explains their photography, helps them communicate with others.”

When Luhring meets with clients, she helps them use the technology that best fits their purposes. She determines if a simple Web site fits the client’s needs, if e-commerce is involved, if the client will do changes, if there is a need for special elements such as a SEO (search engine optimizer), if they want to add a blog to help search engine placement and subsequently increase visits to the site, or if they want to use twittering.

“I like to see our clients grow,” Luhring said, “to adapt to technology because it satisfies their need to communicate.” For a portfolio of the company’s work, visit http://www.3wdesign.com.

Or visit Luhring’s personal Web sites, blogs, or podcasts for demonstrations of how she incorporates technology into her own life. She maintains a blog at http://www.oneminutewonk.com in which she provides digests of political news items. And http://www.mybarackobamapaperdolls.com – with the title as a takeoff on Obama’s campaign Web site, http://www.mybarackoboma.com – is the latest venture.

Luhring’s business partner in this venture is her sister Beth Anderson who lives in Green Bay and is in charge of fulfillment. The POD (print on demand) Starter Kit orders are snail-mailed to customers. The monthly outfits are emailed free as PDFs to be home printed, but for a small charge printed copies can be snail-mailed.

The Obama paper dolls are an outgrowth of Luhring’s interest in editorial cartoons. The February outfit for Obama is a clingy caped superhero outfit with an “O” emblazoned on the chest; March is a surgeon’s scrub suit with an IV containing green blood.

Also available is a Sarah Palin doll in an Alaskan adventure outfit, and a letter explaining her willingness to replace the aging and tired-looking Joe Biden, all in the spirit of an across the aisle bipartisanship. She invites him to Alaska to take a ride on her snowmobile and see Russia.

“I try to be funny, but not mean,” Luhring said. “But I wouldn’t vote for her. I see her as a replacement for Ronald Reagan.”

One of Luhring’s Obama paper doll customers is Arabella Grayson in California who is adding the piece to her private collection of black paper dolls.

Barb Luhring read in Wired Magazine that Barack Obama’s presidential campaign was recognized as the number one user of communication technology in this country. He might one day become one of her customers, purchasing a paper doll that he can call his own!