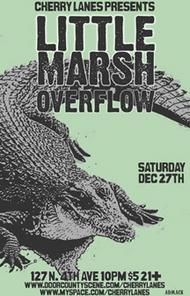 Beer, knitting needles, cross-country skis: Door County’s residents have a lot of coping mechanisms to help them get from November to May. Though it’s only his second winter on the peninsula, Sturgeon Bay resident Adam Mackintosh has already found his own amulet to ward off the winter blues: rock posters.

“People think winter will go slow,” Mackintosh says. “But I look at all the [music] shows and I think it’s going to go so fast. I say, ‘Just put up 10 rock posters in the kitchen.’”

Luckily for Mackintosh, he’s got enough posters to paper a whole house: the veteran songwriter and rock musician has spent the last three months honing a new set of skills as a graphic designer. Since September, Mackintosh has found himself – rather unexpectedly – in the role of the primary designer of posters for concerts at Cherry Lanes in Sturgeon Bay.

“I didn’t set out to be a graphic designer or a visual artist,” Mackintosh says. “It just so happens that I can do this and it’s liked by people.” 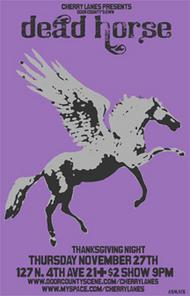 Mackintosh originally came to the county when he broke his leg while on tour in Green Bay. He came to Door County for the six-week recovery period his injury required, and immediately “started getting involved” in the peninsula’s music scene. Now, in addition to playing music (which he’s done professionally for 15 years), Mackintosh spends his time teaching guitar lessons and designing posters.

When commissioned to make a new poster for an upcoming show, Mackintosh (true to his artistic roots) starts with the music.

“I try to have fun with it,” Mackintosh says, “to interpret the music and what the show’s going to be like and then translate it somehow” into a poster design. Because he doesn’t pride himself on his drawing skills, Mackintosh takes most of the posters’ imagery from public domain photos or artwork on the Internet. He then edits the images he finds, puts them into relation with other (often unexpected) images, and adds text with the band’s name and concert details.

“If I could draw really well or screen print, I’d do that…but what I’m lacking in originality, I’m making up for in functionality,” Mackintosh says.

The results of this process are striking posters, many of which are currently on display at Kick Coffee on Sturgeon Bay’s Third Avenue. The posters’ fonts range from plain to ornate, the images from simple to complex, but they all share a certain boldness of design and a tendency toward surprising visual combinations. 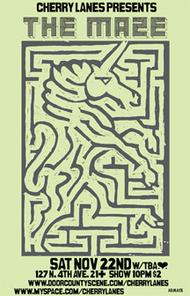 For example, Mackintosh points out one poster, designed for a band called Victims of the American Dream, which features F-16 airplanes dropping bombs on people holding umbrellas above their heads. In another piece currently on display at Kick, the CD artwork for the band D.B. Rouse, Mackintosh features tree branches in the shape of guitars. Mackintosh used real Texas currency in his creation of the piece, evoking a sense of vintage Americana.

“I don’t think anyone else would have put this together,” Mackintosh says of both pieces.

But even though Mackintosh values creative innovation in his posters, he also values their functionality and recognizes the restrictions of art that is functional as well as creative.

For example, though Mackintosh designs the posters in color, most are printed in black ink to save money. And though he enjoys the time he dedicates to poster design, the job isn’t cost-effective unless he finishes any given poster in an hour or less.

“There are so many things in the history of art that exist because of a lack of money,” Mackintosh laughs. “It’s utility-based…I put something up to attract people who would be into that music.” 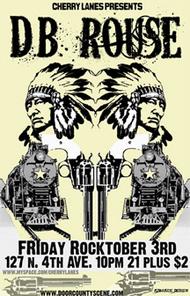 Mackintosh’s own band, The Last Dancers, appears regularly in and beyond Door County. As long as he’s able to keep up this connection to his music, Mackintosh says he plans to stay in Door County for a while.

“Maybe someday someone will consider me for a graphic design job, which would be cool,” Mackintosh says. But in the meantime, “I’ll build websites, play music, teach guitar, all the things I can do and not end up flipping burgers,” Mackintosh says.

Mackintosh hopes to have enough poster art to warrant another display of his work sometime in the spring. Until then, he’s got plenty of rock posters to get him through the winter.