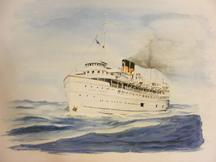 The heirs of Door County watercolor artist and author Robert Dickson Murray have donated one of his historical paintings to the Sister Bay/Liberty Grove Branch of the Door County Library, where it will soon be placed on permanent display.

Robert Dickson Murray, who passed away in 1991, is best remembered for his paintings of the ships, fishing boats, scenery and residents of Door County, many of which were derived from original black-and-white photographs, as well as his written recollections of Door County in the early 1900s recounted in the autobiographical book Thunder Over the Door.

Murray’s watercolors have been displayed at the Maritime Museum in Manitowoc, the Francis Hardy Gallery in Ephraim and the Mill Road Gallery in Sister Bay, among other galleries nationwide. His classic memoir, Thunder Over The Door, was published by Wm Caxton Ltd of Ellison Bay in 1991. The book is available in selected book stores and libraries from Sister Bay to the Library of Congress in Washington.