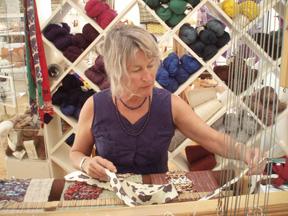 As a memorial to Edward Weidner, founding chancellor of the University of Wisconsin-Green Bay, Fish Creek artist Wendy Carpenter created a woven piece of art that personifies the man and his infamous love of neckties.

Carpenter was contacted in July by Marge Weidner, Ed’s wife and almost career-long assistant at the university. Marge wanted to have something created in Ed’s memory, something that used his collection of neckties, a piece of clothing he was never without. After Ed died in June 2007, Marge and Ed’s daughter-in-law, Ellen Weidner, held onto his collection of more than 400 ties and agreed to have something created out of them in his memory.

“I was taking a dance class at the YMCA when Ellen approached me,” Carpenter said. “She told me, ‘we have all these ties, would you be interested in doing a wall hanging?’ I was intrigued by the idea, so we went from there.”

Marge and Ellen brought Carpenter several bags full of neckties – ties from such far-reaching places as Harrods in London, Damascus, Beirut, Hawaii and the Philippines. He also sported Green Bay Packers ties, singing Christmas ties and commemorative ties from such events as the 2004 Sydney Olympics.

The ties were of all colors and materials, however, Carpenter choose to work mainly with the silk ties and to group like colors together. The piece took the shape of three separate panels in the abstract shapes of people, a form she said she used to remind people of Ed’s humanitarianism.

“The figures were inspired by Ed as being a people person,” Carpenter said. “It also has a 1970s look, which I think is appropriate because that’s when Ed was really active with UWGB.

“When I was weaving in the ties, I could smell what Ed must have smelled like,” Carpenter said. “His cologne, his smells came out when I cut apart the ties to weave them in.”

The three-panel wall hanging will be on display at Carpenter’s Fish Creek gallery, Interfibers, until Oct. 27, 2008. After that, the piece will be displayed in the Weidner Center in November.