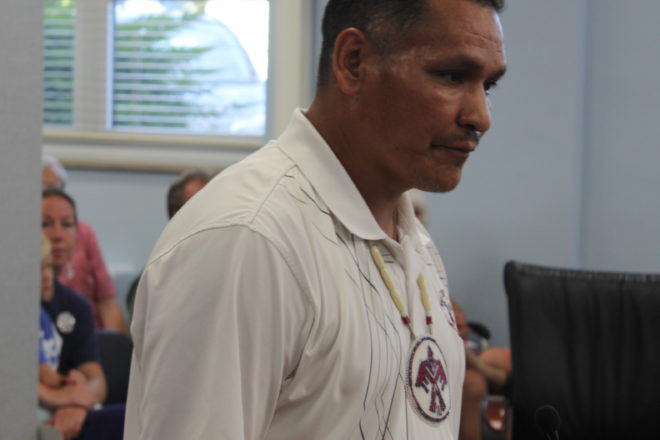 Craig Corn, vice chair of the Menominee Indian Tribe, spoke in opposition of the mine before the county board. Photo by Jackson Parr.

“Our responsibility is to our people here in Door County and to protect them and protect their water,” said Supervisor Megan Lundhal.

Supervisors John Neinas and Linda Wait were the two dissenting votes, both citing a lack of information for their dissent.

“I don’t feel like we got both sides of this story,” said Neinas. “Why are we in a hurry? I would certainly agree with putting it off.”

“I believe our Wisconsin DNR [Department of Natural Resources] is better equipped to address this situation and voice their opinion on the project keeping in mind the best interest of Door County,” said Wait. “I’m voting no only because I think we need some further consideration and research.”

Prior to the vote, the board heard from members of the Menominee Indian Tribe and residents from Menominee, Madison and Door County.

“Water is very important to us, the Menominee people, it should be important to everybody,” said Craig Corn, vice chair of the tribe. “As a tribal leader, I ask that you support opposition to Back Forty Mine, from one elected official to another.”

The resolution opposes any future permitting of the mine. The mine, operated by Canadian-based Aquila Resources, has received three of four permits necessary to begin mining from Michigan’s Department of Environmental Quality. The final permit for wetland delineation is under a 120-day public comment period.

The resolution was sent to the Wisconsin DNR as well as Michigan’s Department of Natural Resources and Department of Environmental Quality (DEQ).

No counties or municipalities in Michigan have passed resolutions opposing the mine, and Supervisor Roy Englebert said that was likely due to expected tax revenue for the state.

Englebert cited a statement from the communications manager from the Back Forty project, Robin Quigley.

“The Back Forty Project will provide significant benefits that include new full-time jobs an annual payroll of approximately $9.5 million and approximately $20 million in total annual tax revenue, more than half of which will stay with state and local governments to help fund public schools and public services,” said the statement.

It is unclear whether resolutions passed in Wisconsin will have an effect on the permitting of a Michigan mine. Paula Mohan, a Madison-based political scientist, told the county board the Clean Water Act has provisions that allow for input when a project affects a shared waterway. But Joe Maki, mining specialist with the Michigan DEQ, said in an earlier interview that Wisconsin does not have jurisdiction or authority over the final permit for the mine.

Three state representatives including Amanda Stuck, Eric Genrich and Jeff Mursau along with Senator Dave Hansen introduced a joint resolution calling on Michigan to oppose the mine and the Wisconsin DNR and Gov. Scott Walker to voice concerns with the mine to Michigan’s DEQ.

“Wisconsin should have a say in the process for approving this proposed mine because of the proximity to our border and the harmful impact the mine could have on our natural resources and public safety,” said Hansen in the statement. “That is why it so important that the Legislature take a position on the Back 40 Mine. It is our best chance to slow the process down and to make sure that the interests of our state are taken into account before the mine is approved.”

In other county matters: