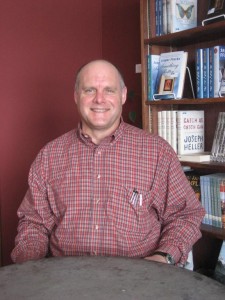 The presidential campaign gets all the hype, but it’s the people elected for local office that often have the most direct impact on the lives of citizens. They decide the fate of our roads, the extent of our social services, and a healthy portion of our tax bill.

Yet their work goes largely unnoticed and unappreciated – unless, of course, something goes wrong.

In the spring of 2002 a lot was going wrong. The Door County Board of Supervisors had just seen three quarters of its members recalled in the middle of planning several controversial and expensive projects, including the county justice center and highway shop.

It was in such stormy waters that Charlie Most joined the board. With relations among members and the public severely frayed, his new colleagues initiated him by electing him board chairman. So much for a learning curve.

“There was no lack of controversy at the time,” Most recalled in a conversation at the Blue Horse Bistro in Fish Creek in March. “No matter what I did it seemed people were criticizing me.”

Most was in a reflective mood as he approached the end of his run in Door County politics. He announced in December of last year he wouldn’t seek a fourth term on the board, bringing to a close an 11-year run that included ten years on the Liberty Grove Town Board and six at the county level.

Most said he wasn’t keen on the idea of being chair when he first joined the board, but was encouraged by friends and colleagues to give it a shot.

“I thought I might seek it after a term or two on the board, but people convinced me I had the skills and a fresh view that could hold a divided board together,” he recalled.

Grant Thomas has worked with Most for the last six years as the county’s Corporation Counsel. He praised Most’s leadership qualities in guiding the justice center and highway shop projects, two of the most significant capital improvement projects in the county’s recent history.

“He helped bring everyone – staff, board members, citizens – together,” Thomas said. “He included everybody in decision-making and made sure he had all the information.”

His tenure included the death of supervisor James Sargent in November of 2002, the creation of a sister city program with officials from Jingdezhen, China, a failed run for state senate versus Alan Lasee, and the tragic explosions in Ellison Bay in July of 2006 that killed two people and obliterated the Pioneer Store.

As his tenure wound down Most found himself sorting through old documents and the memories of a decade in public service.

“It’s hard to believe how much institutional knowledge you gain in this position,” he said. “I’m going through files and realizing just how much we’ve been through in the last ten years. I have mixed feelings. I’ll miss the relationships I’ve developed with people at the government center and with my fellow board members.”

But the knowledge and friendships don’t outweigh the personal toll it’s taken on a man who approached the position as a full-time job.

“I threw a lot into it, and I’m very much aware of what I’ve given up in my personal life to do the job,” he said, with a touch of regret. “To stay involved in politics I’d have to be compensated commensurate with the time it takes.”

Thomas said Most spent three or four days a week at the government center and committed at least 30 hours a week, always making himself available by phone when he wasn’t in his office. The county board chairman is paid $10,200 annually, plus $150 for monthly board meetings and $25 per hour for committee meetings.

“As a staff member I will miss him,” Thomas said. “He was very competent and concerned about the issues and was a good leader in a crucial time in the county’s history.”

Liberty Grove Town Chairman Bill Casey worked with Most for a decade and said the town was fortunate to have had his services. Casey ran for chairman when Most gave up the post in April 2007.

“Charlie has certainly given a great deal to our town and the county,” Casey said. “He was a very thorough legal hound who spent a lot of time on statutes and making sure we did things right.”

Casey said Most and Liberty Grove Administrator Bud Kalms turned the picture around for Liberty Grove in respect to county zoning.

“He and Bud attended Resource Planning Committee (RPC) meetings regularly and their constant attention established a very good working relationship with the RPC, giving us a stronger voice.”

Whoever the board chooses to succeed Most should be prepared to handle a heavy load if they want to do the job right, he said. Ken Fisher, Marc Savard, and Leo Zipperrer have all put their hats in the ring.

Most was involved with several committees on the state level and communicated regularly with other county chairs and administrators, often visiting Madison on county business. While not required by the position, he said such efforts go a long way for the peninsula.

“I don’t know if you’ll find someone who will want to serve on all the committees and do the traveling to Madison, but those things are hugely important,” he said. “Legislative days, which Rob Burke has done a tremendous job with, has been great for making Madison aware of our issues and has paid off ten-fold for Door County.”

County Administrator Michael Serpe said Most brought incredible knowledge and enthusiasm to his position, enthusiasm that will be difficult to replicate.

“He knows Door County is not an island,” he explained. “We’re players at the state level, and he wasn’t afraid to do the outreach.”

Most listed the county’s proactive response to water quality problems at several beaches as one of the achievements he is proudest of during his tenure. Sixty-four beach-goers fell ill in July 2002 after swimming in Nicolet Bay, generating bad press and a Beach Bum label from the Natural Resources Defense Council.

“At the beginning there was some reluctance to address it,” he remembered. “But ultimately the decision was made to pursue monitoring and we moved from a Beach Bum to a Beach Buddy in a couple years.”

Most came in with controversy and he leaves under a bit of the same. The board increased spending 12.8 percent in the most recent budget, a fact many candidates in the April 1 election cited as a major mistake. Most described the bump as a result of being overly conservative in previous years.

“After the recall, the board was really motivated to hold the levy, and maybe we did too good a job,” he said. “Eventually you have to catch up.”

Most worries about the effect state-imposed levy freezes will have long-term on local government.

“That’s eventually going to damage county services,” he said. “Some of the programs not mandated are the most popular, like beach testing and community services.”

And he would like to see the public do more to hold their local officials accountable.

“The boards are representative of society as a whole,” he explained. “About a third do their homework, another third pay attention to specific issues they’re concerned with, and the other third barely breeze through all the information. The ones that excel give up a lot of time for very little pay.”

But it’s hard to hold representatives accountable when there’s no competition. The April 1 election featured just four contested races for county board.

“It would have been nice to see more people step up,” he said. “But by not paying commensurate with the work you end up with fewer people willing to do it. You’re essentially limiting it to retirees, because they’re the only ones who have the time.”

Now Most will be spending his time elsewhere, getting back to his woodworking hobbies and long-delayed house projects. He said he’s been humbled the last couple months by the expressions of gratitude from colleagues and supporters, and will walk out the door fulfilled.