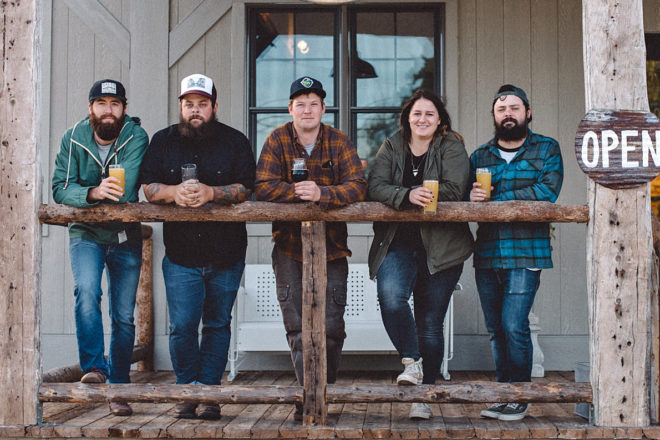 Located in Baileys Harbor, Hacienda will primarily focus on producing experimental hoppy ales and stouts as well as traditional and non-traditional Belgian/farmhouse-inspired ales.

Hacienda’s focus is rooted in their original vision and aspirations for Door County Brewing, creating beer tied to a time and place, inspired by local heritage, but with a focus on experimentation. When opening Door County Brewing in 2012, they did not have the financial means or brewing experience to invest in such a creative project. Their journey in craft beer during the past five years has evolved their interests, curiosities, and desires – which will be best fulfilled through Hacienda, while maintaining the image and familiarity of the Door County Brewing brand.

“Hacienda Beer Co. is the culmination of five years of dramatic growth,” said Danny McMahon. “Hacienda will allow us to release some of the most interesting and exciting beers we’ve ever brewed. It made sense for us to make this transition now with the massive growth we’ve seen in our new taproom and with our new brewhouse coming online. With our new space, we’ll be able to grow our mixed fermentation program into something of decent size, and we’ll finally be able to get Milwaukee and Madison a consistent flow of juicy and fruited IPAs, which have primarily only been available in our taproom. It’s going to be a very exciting venture that I think will draw some attention from fans of Door County Brewing as well as people who aren’t yet familiar with us.”

For a while the McMahons have wanted to find a way to properly differentiate the beers made in Baileys Harbor (the more experimental offerings found in the taproom) and their year-round flagship beers currently under the Door County Brewing label. The arrival of their new 15-barrel brewhouse provides them the opportunity to produce more beer from Baileys Harbor than ever before.

Starting in February, all of the beer produced from the Baileys Harbor brewhouse will fall under the Hacienda Beer Co. brand. At that time, all Door County Brewing core brands and select seasonals will remain in the capable hands of Octopi Brewing, but will remain available for on-site consumption and to-go sales at the taproom in Baileys Harbor.

Hacienda beer will be available alongside the Door County Brewing flagships, coexisting in their taproom and music hall.

Many of the seasonal and experimental offerings from Door County Brewing Co. will transition to the Hacienda brand. Among these transitions will be our seasonal farmhouse ales, Le Printemps, L’ete, L’automne, and L’hiver. However, these beers will all take different forms – they will use more unique and local (sometimes foraged) ingredients than in years past and some will incorporate mixed fermentation.

“We plan to take advantage of our relationship with Hidden Acres Farm and Door County Hop Farm to source a variety of local ingredients, including locally grown hops, for these beers,” Danny said.

These farmhouse seasonals will be available in draft and bottle-conditioned single-format bottles. In spring, Le Printemps is planned as the first bottle release under the Hacienda label. In addition to the farmhouse ales, Everything Eventually – a New England-style pale ale brewed with a heavy handful of Citra and X331 hops and a recent taproom favorite – will serve as Hacienda’s sole year-round flagship.

Along with the brewery’s new 15-barrel brewhouse, three foeders will arrive in February from Foeder Crafters of America, and by next year, they plan to have a mix of approximately 75 used wine and spirit barrels for mixed fermentation and barrel-aging programs. These foeders and barrels will be housed in their original brewery on County F in Baileys Harbor, which will become a dedicated mixed fermentation and barrelaging facility.

They are also eagerly awaiting the addition of a new koelschip that will find its home in the old cabin that sits beside the beer garden of the new taproom, allowing them to produce the first spontaneously fermented beer incorporating Door County wild yeast and bacteria.

Hacienda plans to distribute beer through Door County Brewing Co.’s current distributors (Wisconsin Distributors Inc., Flanigan Distributors, and Badger Beverage Alliance) to key accounts in select markets across the state. Although the taproom is the primary focus, the rest of Wisconsin will see more beer produced from Baileys Harbor than ever before. They will can beers monthly to supply these markets with beer on a semi-regular basis.