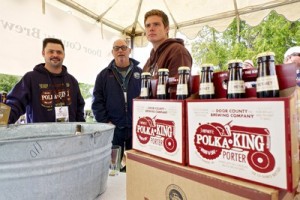 The craft beer industry has many great stories about families coming together in a commercial brewing enterprise – the Careys of New Glarus Brewing, the Klisch brothers of Lakefront Brewery in Milwaukee, the Lonsways of Stone Arch in Appleton, the Buttera family at O’so in Plover, to name just a few here in Wisconsin.

Add the McMahons of Door County Brewing Co. to that list.

“Danny’s the artistic, creative craftsman side of it,” John McMahon said of his brewmaster son. “I’m the business side.”

Danny was 7 when his family moved to Door County.

“This is where I spent most of my life,” he said.

But he left for college in Minneapolis and both he and his family thought he wouldn’t be coming back to Door County for anything other than family visits.

“Honestly, my wife and I figured our kids were gone,” John said. “There was no reason for them to stay around. There’s no business that’s open year-round. Nothing that’s going to be here long term.”

“We just got hooked right away. We just kept going at it,” Danny said.

“He’d bring beers home that he brewed, and it was just fantastic,” John said.

That got Dad thinking. “I looked around and thought, ‘Why is there not a Door County Brewing Company?’”

If there were, he knew a young man who could serve as brewmaster.

“Britt (Unkefer, owner with wife Sara of Wild Tomato) and I talked about brewing in the back. Turns out they’re in a flood plain and can’t expand,” John said.

In the meantime, John had called Danny and asked “Would you come home if we built a brewery for you?”

“Then it evolved into finding that building in Baileys,” Danny said of the old grocery store at 2434 County Road F in Baileys Harbor.

The company is conducting a capital campaign to raise money for the brewing equipment, but currently contract brews with Sand Creek on the other side of the state in Black River Falls, Wis.

“It’s a long haul,” Danny said, but both he and his father said they explored a number of contracting brewing options and felt most comfortable with the Sand Creek Brewery.

“They do a lot of contract brewing, but we are the fastest growing contact and our run rate is getting close to their largest account, which allows us to ask for favors,” John said. “They’re more of an extension of us instead of a business partner.”

They made a conscious decision to do something different with a first release, thus Polka King Porter was born.

“Porter is a style I love so I was really pushing this. I knew we could make a great porter,” Danny said. “This porter is about as traditional an English porter as you’re going to get.”

“Our distributors were like, I can’t believe we’re selling all this porter in the summertime,” John said. “They didn’t believe they would sell porter, but they can’t keep it in stock. First thing out of everybody’s mouth, ‘We can’t believe we sold porter in July.’ They also said, ‘If you’d come out with an IPA or a pale ale, we probably would have totally ignored you. And that your second beer was a wit (Little Sister), without any mention of a pale ale or IPA, that takes big cajones.”

The proof of their success to date is in the numbers.

By Memorial Day 2014, they hope to have the Baileys Harbor building open with a taproom and merchandise area upstairs and downstairs a sour ale production facility.

“It’s inspiring to be in the basement,” John said. “It’s all stone. If you think of a craft brewery, that’s the patina and vibe you’d want to have. It’s got the right environment, the right microbes. We want to do some really cool, out there things, that when people first hear it are going to go ‘You guys are crazy!’ and then when they taste it they’re going to go, ‘We love how crazy you guys are!’”

On Saturday, Oct. 5, the brewery will open its garage door for the release of its first special edition beer, Goat Parade Smoked Imperial Stout in 22-ounce bottles.

“We haven’t been able to put out any of the off-the-wall, crazy beers,” Danny said. “Goat Parade is our first ‘watch out’ beer. It’s a 10 percent imperial stout. It’s really, really awesome. It’s a cold weather beer, definitely. We added a good amount of smoked malt to it. It’s thick, it’s chewy, but it’s sweet enough that it mellows out the smoke, so it’s a quaffable 10 percent beer. There are not a ton of smoked beers in Wisconsin. Off the top of my head, I can’t think of one.”

“We’ll have the food truck (Nistebox) over there,” John said. “We’re signing, numbering and waxing 400 bottles. They will be our first 400 ever of a seasonal limited edition. We’re pretty excited about that release.”

The lineup for the special release begins at 8:30 am. Wristbands will be issued to the first 150 people to buy the bottles at $15 each, with a limit of a dozen bottles per wristband.

They also have a plan to involve local growers in the brewing of Door County Brewing Co. beers.

“We want to have a town hall meeting in the wintertime for any grower who wants to talk to us,” John said. “What we want to do is put as many local ingredients in our product, whether it’s honey or a spice. If we can get people to grow wheat and barley, we’re partnered with Briess (a malting plant in Chilton). Briess will sell you the seed and let you bring your grains in. They’ll malt it for us and set it aside.”

“We have the potential to create these little micro-economies,” he continued. “Farming is difficult without sustainability. We want to make it sustainable. If you can grow the quantity and quality, we’ll treat you just like anybody else who buys commodities. If I can sign a three-year contract and say I’ll pay this much for every bushel of wheat you produce, we want to be able to do that, but our first choice, we want it to be a Door County grower. Our second choice, we want it to be a Wisconsin product…if we can help other people build their businesses around what we’re doing, that would be a nice thing for everyone. We’re totally serious about making that happen.”

“Looking at the future, what we’re going to brew, instead of making a recipe first and going, ‘Hey, do you guys have any of that?’ we’re going to go, ‘What do you guys have?’ and what can we brew based on what it is we have in Door County. Bring things back full-circle, bring it back to the community. Eventually, what we would like to say, not that one ingredient got in the brew from Door County, we’d love to say 80 percent or more is local, and what we envision on the six-pack is a list of every local provider, so that if you buy our beer in Chicago, in fact, this comes back to the name in a positive way, you’re going to taste Door County. Door County is in that glass.”

Door County Brewing Co. is teaming up with Max Supper Club in Baileys Harbor to present a four-course Beer Pairing Dinner at 6 pm on Oct. 9.

The evening will feature the award-winning cuisine of Chef Mitch Ciohon pairing with the craft brews of Door County Brewing Co. The McMahons will be on hand to introduce each pairing and Chef Mitch will discuss his approach to selecting the menu for that evening.

Dinner will be served in Max Supper Club’s main dining room. Cost is $35 per person (plus tax and gratuity) and reservations are required. For information and reservations, call 920.839.1404.

What’s In a Name?

Door County Brewing Co. is a great name for a brewery, but the McMahons had some doubts at first that their beer would be considered a novelty tourism product because of the name.

“We were a little worried about the name,” John McMahon said. “The last thing we wanted to do was sell the beer because of the name. What matters in this business is that you sell a quality product. It’s not about buying the first drink, it’s about buying the second and third. We were worried that people wouldn’t consider it a legitimate product.”

At the same time, they were excited by the name.

“We feel it’s the last great beer name in Wisconsin,” John said. “Wisconsin Brewing is gone. Milwaukee Brewing. Green Bay Brewing, Capitol. What else are you going to come up with? We were nervous but we also knew it would help us at the same time. We’ve been getting great positive feedback on the taste. To us, more than anything, that’s what matters.”

“Every beer we make, whether it’s crazy or super simple, we’re super excited to put it out there. Whatever we make, we try to make the best beer possible,” Danny said. “We don’t want to be a fad brewery. If I didn’t think we’d still be around in 20 years, I wouldn’t have started it.”

“We want to give Door County something back that exists for a long, long time and has a legacy that people care about. That’s part of what we want to create,” John said.