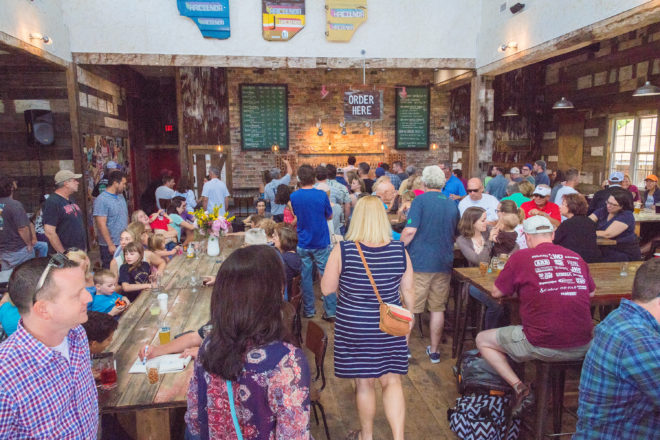 The new Door County Brewing taproom quickly filled up after the 11 am ribbon-cutting ceremony. Photo by Len Villano.

The excitement in beautiful downtown Baileys Harbor was palpable Saturday morning, July 1, as a crowd gathered for the opening of the new Door County Brewing Co. – just three years after the brewery opened its first taproom just a few blocks away.

VIDEO:  Take a tour inside the new taproom>>

But it might as well have been a world away for the difference in feeling this new location has in the very heart of the town on the main corridor of Hwy. 57.

Just a few people were on hand for the first taproom ribbon cutting in 2014, but there were more than enough people at the latest one to immediately fill the new taproom with a joyful buzz of “awesome” and “oh my god” and “I love it” and “pretty cool.”

Town Supervisor Bobby Schultz was one of those in attendance for the grand opening at 11 am Saturday, July 1. He sees the brewery as the downtown anchor that Nelson’s Hardware Store used to be.

“They did a wonderful job and it’s going to be a great asset. It’s just an all-around good thing for our town,” he said.

“We would like to thank the McMahon family for investing in our township, not only creating economic value, but also creating jobs,” he said. 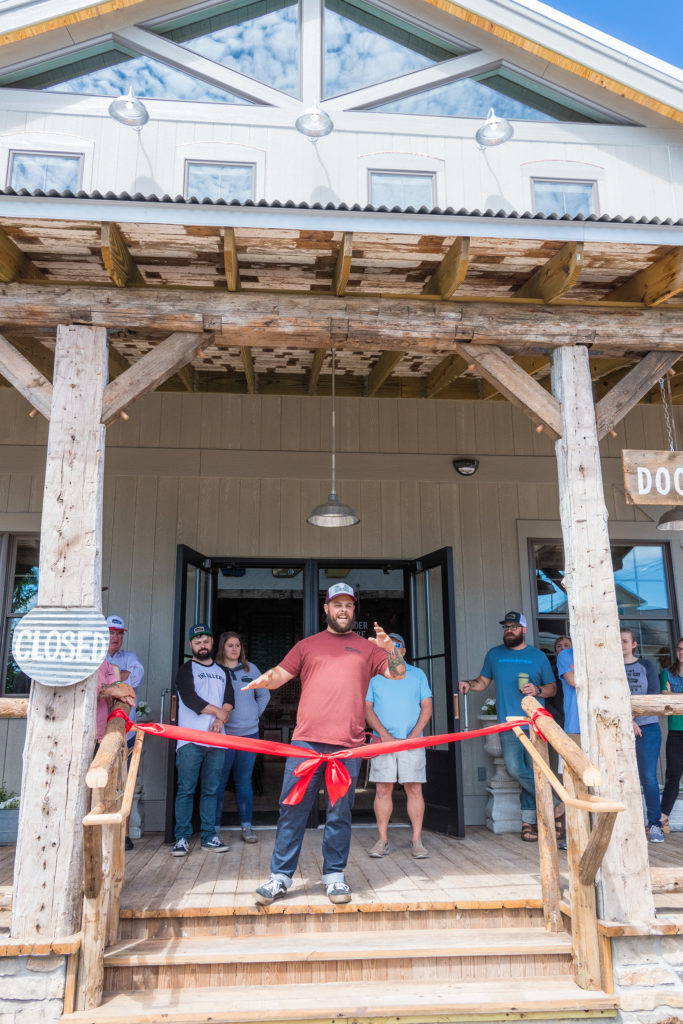 Ben McMahon talks to the crowd before the ribbon cutting. Photo by Len Villano.

Speaking for the family, Ben McMahon thanked his family and extended family of employees, Peninsula Building Systems employees for carrying out the family’s vision for the building, and all the people who came out for the event and who have supported the brewery.

“We love Baileys Harbor,” said John McMahon. “When you go in there, you will see this as our expression, this is who we are, and we’re just going to have a good time here forever.”

Once inside the open, airy, inviting taproom, beer started flowing from the 26 taps (and soda from two more). There is seating for 80 inside and another 84 outside.

John explained how he had to ask the skilled craftsmen who built the taproom to forget their training and build in the style he envisioned, using reclaimed wood from two barns in Luxemburg and bricks from Valmy that make up the tap wall. The masons hired to put the brick wall in had to retrain their muscle memory from making clean swipes of the mortar because McMahon wanted to see the mortar oozing out from between the bricks. He points to a few of the lower levels where the mortar is cleaner, meaning the craftsmen had not yet adjusted to what he wanted.

Once the doors were opened Ben McMahon stood just inside with a beaming smile.

“We’re more than pleased,” he said as he surveyed the full beer hall. “Everything just came together. This is kind of the end all and be all for us.”

“This is what we wanted,” said head brewer Danny McMahon. “It’s awesome to be this close to the street.”

He said this feels more like a restart than just a move down the street, and looks forward to the arrival of new brewing equipment in October. He said the seven-barrel system in the basement of the old taproom will be where he creates more experimental styles with wild yeast.

“Opening was great,” John McMahon reported after the first weekend of business at the new location. “We were glad to finally show everyone what we’d been doing. It exceeded our expectations and the feedback was all positive. We still have some small things to complete but we were grateful that we had the support of our contractors to be open on the 1st.”