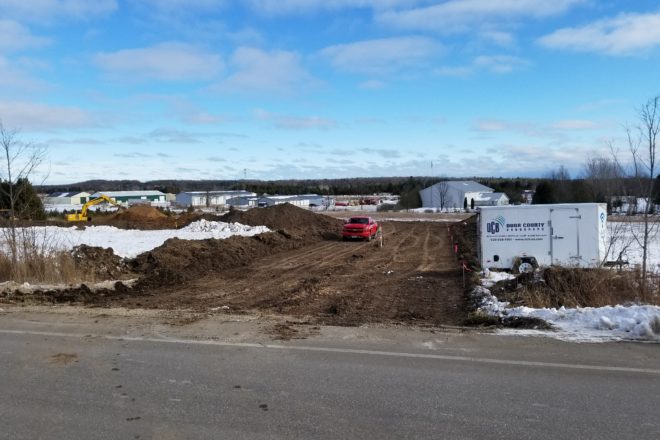 Door County Broadband has broken ground for its new headquarters at the corner of County F and EE in Baileys Harbor.

“We hoped to do it earlier but had to wait for the town to do the sewer system, and they had to wait until the season was over because they were running through the RV park [Baileys Grove Travel Park & Campground] next to us. The owner requested it not start until the season was over,” said DC Broadband owner Kevin Voss, who said he expects a spring occupancy in the new 4,000-square-foot building.

“Door County Broadband has outgrown the current place we’re in [in downtown Baileys Harbor],” he said. “Instead of having an office separate from our warehouse, we’re going to have better efficiencies and will be able to handle staff growth.”

The new location will include a new tower that replaces a more circuitous route the company now uses to bring a feed from their backbone. Voss said the tower will allow a more direct feed.

“This will allow us to increase the capacity, probably close to tenfold from where we are right now,” he said.

Someone had asked if the new system will be as fast as a T1 line, a popular option for business-class internet service.

For more than three decades Voss has been involved in the commercial real estate industry with his company TRIAX, which is developing the new Door County Broadband headquarters and a commercial development with outlots in the one-acre range that will be sold off.

“We’re still working out the details on that part of it because it was secondary to the Door County Broadband deal,” Voss said. “Once that’s finalized, we’ll be able to peel off other lots.”

Voss got into the broadband business purely out of necessity when he and his wife, Pam, bought a home in Fish Creek and learned they could not get internet service. When they learned they were not alone and that the lack of service on the peninsula was preventing people like them from locating in the county and working remotely, Voss bought the companies formally known as NEWWIS and Online Door County and created Door County Broadband, LLC on April 1, 2014.

Even though he became an internet service provider by necessity, Voss does it with gusto and excitement for the possibilities that better service can mean for the county.

“When we purchased the company, it had, give or take, about 800 customers,” he said. “We’re now sitting at about 2,500 in just three years. The growth has been off the charts.”

Voss said the business plan took growth into account, but instead of taking five years for this upgrade, it only took three years. The company began with four employees and now has 10.

“We got there quicker than we thought we would,” he said. “We’re building to bring in more staff. The office we are going into is double the space we have now.”

Voss is particularly interested in helping to stem the brain drain from the county by working with young people interested in tech careers.

“We put kids on in the summer right now. It allows them to stay cutting edge before going on to college,” Voss said. “We’re looking for some of them to come back because we’re always looking for talent. We have reached out to NWTC. Your kids that are rock stars that want to stick around, bring them here. We’re trying to help stop the brain drain.”

“He is a poster child for this,” Voss said. “He was educated at NWTC and was heading to Florida after graduation. He was referred to us by a friend. We did a trial run and three years later he is now our operations manager. From a network perspective, he is one of the sharpest guys we have. And here is a guy who was on his way out of Dodge. He’s happy to be able to stay here with family around, and that’s put a smile on my face.”