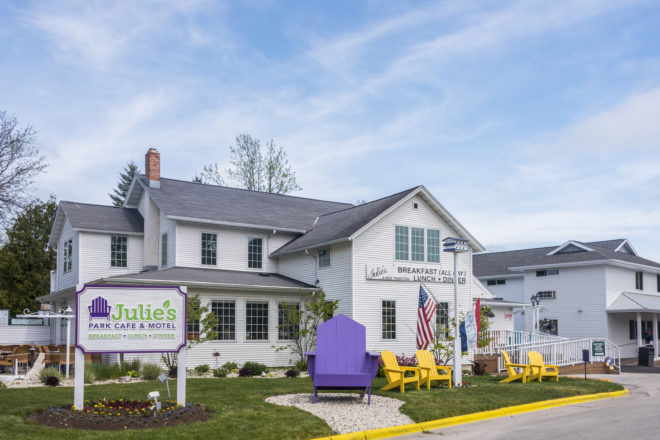 While we are used to businesses throughout the peninsula closing up shop at the end of October, there are more business owners choosing to stay open into the winter months. The move could help burgeon winter tourism as the question, “Is there anything to do here in the winter?” is answered.

Many business owners agreed there was not a slow-down of tourism throughout September and October.

“I feel like last week was the first it felt like a fall day,” said Jess Grasse, owner of Grasse’s Grill in Sister Bay with her husband, Jimmy. “It’s just been so busy.”

Grasse’s is one of the businesses leaving the lights on into the winter. Typically closed after Fall Fest, the restaurant will stay open Thursday through Saturday in November and December.

Julie’s Park Café in Fish Creek is another place staying open on weekends through Feb. 19, while the motel is open seven days a week.

“We just see a need of it,” said Shane Solomon, owner of Julie’s. “We’ve been watching November and looking at hotel occupancy and we saw that there are more and more people up here. The biggest complaint we have is that there’s nothing to do here. We figured with the park right outside our back door we can give them one more thing to stay around for.”

“I would say the number one reason is because we have a core group of staff that live here year round,” said Grasse. “The last couple of years we felt were not ready to be done yet.”

Solomon added that recent changes in the unemployment laws also made the winter season more complicated for those collecting unemployment at the county’s seasonal businesses. By offering employment through most of the year, strong employees are less likely to seek jobs elsewhere.

Grasse also cited the local following and that the transition from being open to closing down is sometimes too drastic.

“My husband works in the kitchen every day that we’re open in the summer and to go from that to not working at all, he gets too antsy being off for that long,” said Grasse.

Grasse’s made the decision to stay open last winter before this busy fall season, but the tourists that keep coming to the peninsula are an added bonus.

“We’ve been watching the last few years after we close and noticing that there’s still a lot of people in town. It’s our fifth season. This was just the right time for us to try this,” said Grasse.

In the past, those few businesses that would stay open through the winter did so more as a public service to their employees and the locals rather than a way to make a profit. Now, as more business owners invest in the growing quiet season, they hope their efforts will snowball into year-round economic activity.