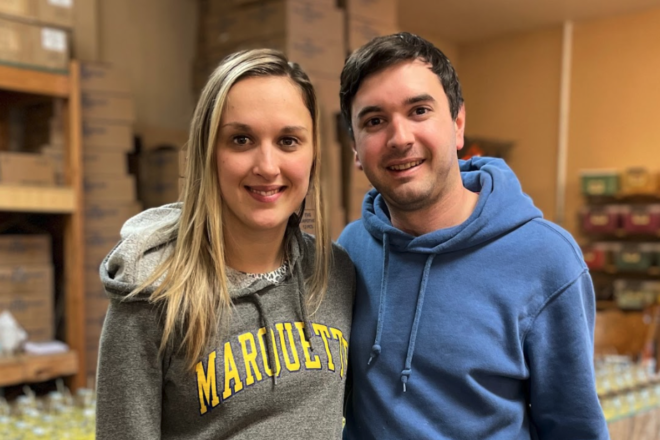 When we reported last week that Door County Candle Company was selling yellow-and-blue, vanilla-scented candles and sending 100% of the profits to Ukraine, the company had sold 4,500 candles.

On Monday, exactly one week after our initial report, it had sold 19,761 candles – a number that will surely have topped 20,000 by the time you read this – for a business that typically sells 15,000 candles during the course of an entire year.

Also by the time you read this, the company was prepared to deposit its first donation check of $100,000 for the Ukrainian nonprofit Razom for Ukraine – “togetherness” in English. The organization is providing critical medical supplies and amplifying the voices of Ukrainians, according to its website.

To say that husband-and-wife owners Nic and Christiana Trapani are elated is an understatement. Their effort began because Christiana, whose maiden name is Gorchynsky, is a second-generation Ukrainian. She wanted to help her family members in war-torn Ukraine who are fighting to survive Russia’s invasion of their homeland.

“We were not prepared for this volume,” Christiana said. “I thought 300 was pushing it.”

Rush orders of wax and glass and fragrance have kept them supplied as they melt and pour and let cool overnight the Ukrainian-flag-colored candles. Their effort has been covered across the country, including in a segment on the Today show.

On Saturday morning, they arrived at their store to find their parking lot full of vehicles. They looped customers through a long line – never had their Carlsville store been so full. Yet they’re reserving only 150 candles to sell in the store each day, with a limit of two per customer. The rest of the orders are being taken online and by phone. They now believe they will have shipped orders to the majority of states, including Hawaii and Alaska.

Production for their regular business has stopped. Blue painter’s tape wraps the molding around the store’s door frames and windows – reminders of the painting and major renovations they were preparing for a short week ago.

“That was completely halted,” Nic said.

They’re now learning how to perfect an assembly line. For a business that prides itself on same- and next-day shipping orders, the 9,000 online orders waiting to be filled are more than a little anxiety producing. But they can produce a maximum of 600 candles within a 24-hour period and are telling customers the wait will be seven to eight weeks.

They’ve heard not a single complaint; they’ve heard the opposite of complaints. People drive up from hours away to meet the young couple and thank them in person. Fellow Ukrainians also arrive or call, sharing stories and photos. Local volunteers and businesses, including the neighboring Door County Coffee and Tea, have provided free lunches, free coffee. Other families, total strangers, have dropped off pizzas, cases of water, Danish.

“The people who have come together for this – it’s beautiful,” Christiana said, tears welling in her eyes.

Their employees have rallied for the effort and worked tirelessly. Still, “volunteers are going to be critical to getting it done,” Nic said.

Those who are interested in volunteering should call the store. People may show up in person but should not expect to volunteer the same day. They’re keeping a list so they can onboard people smoothly.

Nic and Christiana share all of this and smile through their obvious exhaustion. They’re running on adrenaline fueled by the goodness and kindness that have been pouring into their store and lives since their effort began.