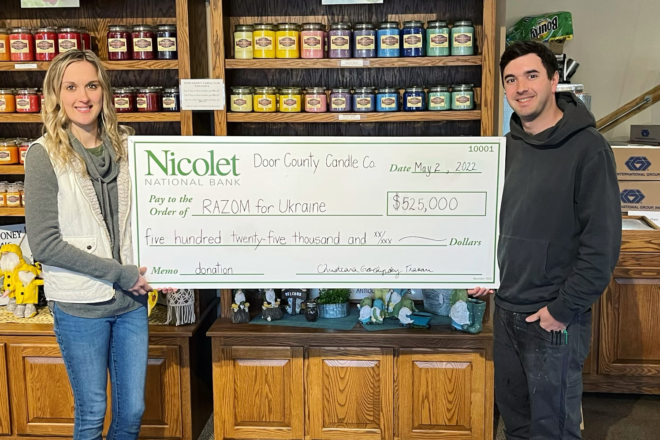 Christiana and Nic Trapani of Door County Candle Company hold a check that represents the amount of money they have raised in little over two months to help the people of Ukraine.

Look no further for proof of the wild success that comes from gestures of the heart than the Candles for Ukraine campaign that Door County Candle Company owner Christiana Gorchynsky Trapani started two months ago.

Moved by the fears she’d heard over the phone from her Ukrainian aunts and uncles, Trapani’s plan was to donate 100% of the profits to a Ukrainian nonprofit organization. Maybe she’d raise $5,000-$10,000, she thought.

As of Monday, Door County Candle Company has donated $525,000 to Razom for Ukraine.

“I’m really proud of what we’ve been able to accomplish in such a short amount of time,” said Trapani, in what is surely the understatement of the year.

They’ve not taken inventory since the candle campaign began, but Nic, Trapani’s husband, estimated they have sold some 60,000 candles to date.

“They like having a physical symbol that they’re standing behind Ukraine and are able to support it in this way,” Trapani said about the candle customers.

Some 400 volunteers had worked more than 8,000 hours as of a couple of weeks ago, helping to make, label and package those candles for shipping, all of which has become easier with time and increased automation. Customers ordering candles from around the country and world have expected delivery times in line with a large candle factory rather than a handmade-candle operation housed in a 3,500-square-foot store located on a rural Wisconsin peninsula.

With thousands of orders to fill, the Trapanis found ways to increase their production speed with machinery, including an automatic candle-wax dispenser; a labeler that eliminates the peel-off, stick-on method; and revolutionized packing and shipping.

They used to package the candles by hand and could ship about 200 that way on a very good day. Now they’re shipping out 600-800 candles a day in cartons that are packed, taped and sealed in what seemed like seconds during a demonstration of two new machines that automate the process.

The war has now been going on longer than two months. American attention may have shifted, and orders have slowed.

“The sad thing about it is it’s not getting any better there,” Trapani said about her maternal relatives in Ukraine.

The Ukraine candle donations are going to Razom for Ukraine, a 501(c)(3) nonprofit organization founded in 2014 to support the people of Ukraine in their continuing quest for democracy, justice and human rights. As of a couple of weeks ago, Razom had spent $19.4 million in donations to provide humanitarian war relief and recovery, depending on the most urgent needs as they evolve.

The more than half a million dollars donated by Door County Candle Company is, quite simply, “keeping people in Ukraine alive,” said Dora Chomiak, Razom president, board member and volunteer, by email.

She said the donations are buying medical supplies, gasoline for cars to deliver the supplies, communications equipment to get the supplies into the right hands safely, and grants for nongovernmental organizations that are delivering food to Ukrainian towns and villages.

“Medical needs are the same, but becoming more needed in areas where local support is running out and where large, international aid organizations have not yet arrived,” she said.

“I was definitely, after all this, really inspired to have a philanthropic mission” as part of the business model, Trapani said, such as Candles for a Cause or something similar. The idea will be to make two to four special candles annually – a Blossom Festival Candle or a Breast Cancer Awareness Candle, for example – and donate 50% of the profits from those products to nonprofit organizations.

“This is our way to help,” she said, with the conviction of someone who has followed her heart and discovered a calling. “We’re not going to stop.”