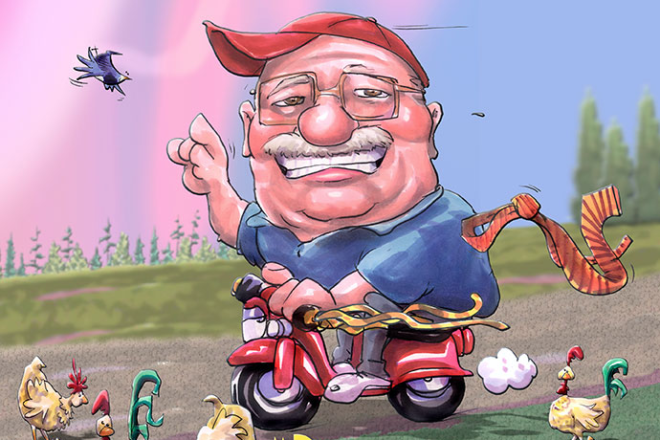 People talk a lot about what constitutes Door County character. They look for it in buildings. They find it on rural roads and shoreline strolls. But nowhere was it encapsulated better than in the man known only as Digger.

Digger was a man of another time in Fish Creek – a time when people didn’t take themselves so seriously, when people worried less about what others might think and more about having the most fun possible.

He loved a good drink at the Bayside, a good-natured prank played on a friend, and a good story told by himself. Fortunately, by the time James “Digger” DeGroot, the founder of Digger’s Grill, died Feb. 4 at the age of 72, he had never shied away from telling those stories during his 50 years as Fish Creek’s unofficial mayor.

“He could never wait to get up in the morning,” explained Bonnie Spielman at a roast of Digger in 2015, “because he couldn’t wait to hear what he had to say.”

In his sandpaper-scraped voice, he would rattle off jokes good and bad, cackle at his buddies, and savage Egg Harbor for kicks.

“He was once asked where he would go if he found out he had only a year to live,” recalled Bob Spielman. “He said he’d go to Egg Harbor because it would feel like a lot longer.”

He got his first taste of Door County while serving in the United States Coast Guard. He was supposed to go to Vietnam in 1969, but at the last minute, his superior told him they needed someone on an island in Door County. He jumped at it and spent the next four years stationed on Plum Island, spending his off days volunteering at Peninsula Players Theater – a connection that would continue for the rest of his life.

He once told Peninsula Pulse writer Allison Vroman that “after spending four years in Death’s Door on that island – surrounded by waters, bluffs, sunsets, sunrises – you either fall in love [with the county] or you hate it. I fell in love.”

But like many, he didn’t stick right away. He would first head to Alaska, where he served as the recreation director for a work camp on the Trans-Alaskan Pipeline in Fairbanks. After two years on the pipeline, the Door County boomerang came for him, and he returned to Fish Creek.

In 1978, he would use his savings to open Digger’s Grill, a restaurant that quickly became part of the fabric of Fish Creek summers.

Digger’s friends gave him a sign reading, “No Shirts. No Ties. No Rednecks.” He hung it in his window, emblazoned it on T-shirts and embraced it as his slogan – one that rivaled “Goats on the roof” in the lexicon of Door County.

For 22 years, he served up affordable fare in the most casual of settings, slinging corn dogs, pizzas and burgers to families, campers and teenagers from his location across from the entrance to Peninsula State Park. (Wild Tomato is located there today.)

He patrolled Fish Creek on his moped, checking the parking lots of his competition to see where the people were going (with frequent pit stops at the Bayside to catch up on town gossip). Digger traded pranks with Doug Butchart and the crew from Thumb Fun and just about everyone else in town. He convinced Smilin’ Bob MacDonald of the Bayside that the pope was staying on Chambers Island, and Digger’s moped once made its way to the top of the flagpole at the Fish Creek post office.

Behind the jokes was a man who cared, who was known to lend money to an employee in need (or in jail), and who helped the kids who worked for him through the years.

“He helped so many people that you never knew anything about,” his wife, JoDee, said. “He had a way of talking to people that made them feel like they were the most important person in the world.”

Digger served on the board of the Fish Creek Civic Association and, for 35 years, the board of Peninsula Players Theater.

“Peninsula Players meant the world to him,” JoDee said. “He watched it grow from nothing to something.”

When Digger’s feet and his health began to fail him in 2000, he sold the restaurant. It was tough for him to let go of the place that had put his name up in lights, but he landed in the perfect spot behind the desk of the Fish Creek Information Center. He would cheerfully (at least to your face) answer the same questions over and over again, or point a visitor to a secret gem, or find a mechanic for you late at night.

“It was the perfect job for him, talking to people all day,” JoDee said.

Even as his COPD worsened, tethering him to an oxygen tank in his final years, Digger’s spirit never waned. He kept working, kept talking, kept joking. When it was time for Andy Coulson to be roasted in 2018, Digger could be there only by video, but he brought the house down with his self-effacing humor.

“I’m sorry I can’t be there tonight, I just don’t have enough tubing to get south of Jacksonport,” he said, referring to the oxygen tank and tubes he needed to breath.

“It meant the world to him to be among those,” JoDee said.