When disagreements turn into shouting matches between co-workers, politicians, neighbors, families and friends, it can be hard to remember that basic thing you learned in kindergarten how to be civil. That’s what the Door County Civility Project wants to fix.

“We know that disagreements are always going to be there and that conflicts are going to arise because of the diversity of views and opinions that keep our democracy strong,” said Shirley Senarighi. “This is not a mission to get rid of disagreements or conflicts, they’re simply a part of life. 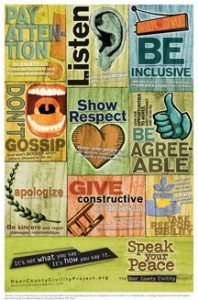 “What we’re hoping is to build a campaign to make it safe to disagree. If people engage in civil communication and civil conversation, they can express those disagreements in a way that others aren’t offended, where it enhances the conversation rather than stops the conversation.”

Senarighi is part of The Door County Civility Project, an idea that came out of a local League of Women Voters meeting after members observed the negative effects of insult hurling, one-liner politics. It wasn’t just in national politics, but state and local as well.

They decided to do something about it. First meeting in January, by March a leadership team emerged to examine nine principles of civility and organize training sessions for people interested in learning how to discuss tough topics peacefully.

“When you want to change something you usually have to start at your own front door. That’s why I think people are interested in becoming involved, because they see that very point,” Senarighi said.

More than 60 people have already pledged to keep civility in mind every day, and many have attended training sessions to discuss practicing civility.

The more people who understand and practice civil conversation the better, said Patti Vickman, leadership team member and district administrator of Southern Door Schools. If people have a common framework for interacting with each other, hopefully their conversations will be more productive and less hurtful.

“I think there are a lot of topics in this county that probably have very diverse opinions,” Vickman said. “Those opinions are healthy, they help us look at what we are doing and bring us together to answer questions and seek clarification and hopefully be able to get people on board toward a cause larger than themselves.”

But civility isn’t just about being nice. It’s about listening to others, including them and respecting them. The civility principles are simple, and for Vickman that means they can unite people from different generations, beliefs and backgrounds.

“A kindergartener can identify with the tenets and so can someone in their 90s,” she said. “It’s something that really will be a common thread to unite all of us.”

During the two-hour training sessions, people shared their frustrations with political and social disrespect and discussed ways to approach controversial topics. People attended the meetings out of curiosity and personal experience.

“I went because I was not happy with my behavior in a meeting and I wanted to know how I could channel that in a more positive way instead of a negative way,” said Gina Wautier, development manager of Women’s Employment Project. “I came away from that meeting with a lot of good ideas and reminders.”

“Sometimes in meetings we can be so passionate about our belief that we lose sight of respecting everyone else’s opinion and trying to work toward a solution without being critical of one another.”

Wautier works with clients in financial trouble, often financial crisis. They come to her for help with job searching, heating bills and transportation, and she can’t always help them.

Wautier hopes her clients will notice the poster and spread civility outside of her office. Maybe if her training rubs off on others, the message will spread further into the community and go beyond those who take the initiative to attend training or sign the civility pledge.

“It’s like preaching to the choir,” she said. “Everybody was [at the civility training] because they want to see change, but sometimes the people who should be there weren’t. How do we foster that? How do we bring the knowledge we learned into the community to the people we really want to hear the message? I think it’s a matter of modeling civility.”

Turning angry, disrespectful debates back into respectful, useful conversation won’t be easy, and the work has to start at home.

“If we want things to be better anywhere we need to first be involved,” Senarighi said.