Schuster threw the gauntlet down after two incidents last September – the Sept. 8 spreading of liquid manure over a sinkhole in Jacksonport that poisoned a dozen wells and sickened 16 people, and then the Sept. 16 spill of 640,000 gallons of liquid manure from a holding tank on the Kurt DeGrave farm in Brussels, the largest manure spill in Door County history. 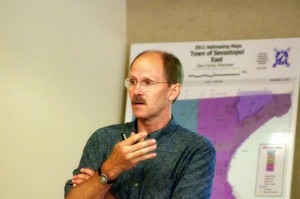 Bill Schuster says his department will give more scrutiny to the nutrient management plans submitted by farmers.

After those two incidents, Schuster ordered an audit of eight nutrient management plans submitted in the spring of 2014. They found errors in all eight. The plans are supposed to detail karst features and other important elements the farmer needs to know to avoid problems with spreading liquid manure.

Schuster said his department takes some of the responsibility for not being stricter about the plans, but he must trust farmers to a great extent.

“There is a certain amount of self-policing because there is no way on earth that staff can review every field that waste is being spread on,” he said. “So it was a disappointment, really. That really set things in motion.”

Schuster’s department got the word out that they were not going to accept any more false nutrient management plans. He also warned members of the Land Conservation Committee that they would be hearing a lot of angst from constituents about the crackdown.

His critics say the department is stricter than other counties, and he says he’s accused of creating his own rules.

“The truth of the matter is, the rules have been the same for years. They’re the same in every county,” he says. “The only difference is in Door County, the citizens of Door County, including the political folks, have valued the protection of natural resources highly enough that it has given our department the ability to do its job. What we’re able to do in Door County you’d not be able to do in every county in the State of Wisconsin.” 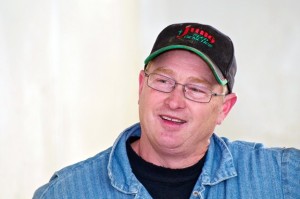 “It’s a lot different than years ago, a lot better now. The manure’s all worked in now right away. Years ago you didn’t do those things much. Years ago you plowed it all under and you’d get more soil erosion. If you took a look at the soil and the crop rotations and manure, it’s just amazing. You take ground that’s not that good, after five, six years, you’ve got some pretty good ground after putting all that organic matter back in there. A lot of people don’t understand that.”- Sturgeon Bay farmer Tim Gilbert, on changes in farm practices.

Conservationist Dale Konkol has been the boots in the field for the department for a quarter century. He walks the fields and talks to the farmers and planners.

“I was really upset about the Jacksonport incident because I worked with those farmers for years,” Konkol said. “There was an incident the previous year with respect to mapping, so I was upset with what happened there.”

Nutrient management plans have to be filed with the department by April 1 of each year. In early February the department held a nutrient management meeting for farmers and planners. Konkol had a big board displaying information about all the environmental problems plaguing Door County and the surrounding area – the Green Bay dead zone, cladophora, erosion, pollution of surface and groundwater.

“This is what we have and a lot of it is attributed to agriculture,” he said at the meeting. “I really hit the conservation end of it. All this change of doing business in big fields has caused a negative impact on the community and the environment. There was no pushback on that. I was not trying to be superdramatic, but to the point. The public is concerned about these issues. Town leadership is concerned about it. It’s time to up your game.”

Konkol knows the overwhelming majority of the farmers he works with are committed to being good stewards of the land because the land is their livelihood.

“Farmers take this seriously and know they have to do a better job,” she said. “The unfortunate thing is that they’re all lumped in the same basket and there’s a lot of negativity out there and they feel kind of bad about that.”

“The farmer really gets bashed now,” said Tim Gilbert, who has about 400 cows and crops about 1,500 acres on County T in Sevastopol.

Gilbert said being an environmental steward is part of being a farmer, and that was the case before nutrient management plans and monitoring programs.

“You’re there to make money,” he said. “You’re not going to ruin the land or run the cattle into the ground. They’re your livelihood. People don’t understand that. You’re in it because you like it or you’re going to be out of business pretty quick.”

He believes farming has gotten much better environmentally.

“It’s a lot different than years ago, a lot better now,” he said. “The manure’s all worked in now right away. Years ago you didn’t do those things much. Years ago you plowed it all under and you’d get more soil erosion. If you took a look at the soil and the crop rotations and manure, it’s just amazing. You take ground that’s not that good, after five, six years, you’ve got some pretty good ground after putting all that organic matter back in there. A lot of people don’t understand that.”

Gilbert added that soil testing has been conducted at the farm long before nutrient management plans were in place.

While farmers may feel they are under the microscope, Schuster and his department prefer helping farmers comply rather than punishing them for non-compliance. Serving notice that false nutrient management plans are not going to cut it any longer is a step in that direction.

Schuster anticipates that eventually a soil testing company will see a market opportunity to provide reliable, trustworthy maps for planners and farmers.

“I believe the plans that have come in this year, particularly the ones on the top of the list, are going to be remarkably improved from last year,” Schuster said. “I’ll be shocked if they misrepresent it and I’d be shocked if these first group of plans aren’t highly improved, quality plans.