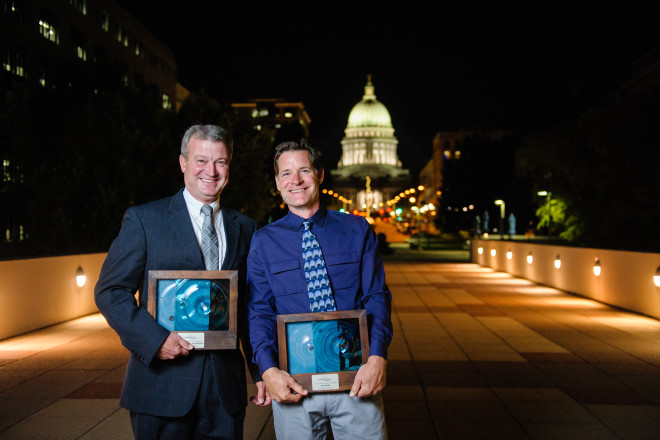 Burke received the esteemed Conservationist of the Year award for his accomplishments at the Door County Land Trust, one of the state’s most respected land conservation organizations. Under his direction, DCLT has worked with more than 100 landowners, garnered the support of 2,200 annual members and preserved more than 7,000 acres – places like the Sturgeon Bay Ship Canal, Bayshore Blufflands and Grand View Nature Preserves.

Roy Thilly, one of the DCLT supporters that nominated Burke, wrote, “While many people have contributed to the success of the Door County Land Trust, Dan’s visionary and dedicated leadership, and his ability to communicate, negotiate, structure, fund, and complete complex transactions, has been crucial.”

Burke received a standing ovation from the crowd of nearly 250 conservation leaders and supporters.

“What excites me most about this award is that it is an opportunity to recognize and shine the light on the tremendous accomplishments of the Door County Land Trust and the many who have worked to protect Door County’s most scenic and ecologically important places,” Burke said.

Burke joined the Door County Land Trust Board of Directors in 1994 and became its first full-time staff member in 1996. He recalled the early days when the land trust office was an extra bedroom in his home and his work shoes were slippers. The land trust now employs a staff of 10 and operates out of offices in Sturgeon Bay and Sister Bay.

According to Burke, “What inspires me to wake up each morning and do this work is that there is so much more to be done, so many more beautiful places that need protection. It’s been a magical ride.”

Representative Kitchens received the Policy Maker of the Year award along with Representatives Amy Loudenbeck (R-Clinton) and Todd Novak (R- Dodgeville). Some years the award is not given; 2015 represents the first time the award has been shared by three legislators.

Mike Carlson, external relations director for Gathering Waters Conservancy, presented the awards, stating that the three have benefitted their constituents and the entire state by “effectively saving the Knowles-Nelson Stewardship Program.”

The Knowles-Nelson Stewardship Program (KNSP), named after Republican Governor Warren Knowles and Democratic Governor Gaylord Nelson, was established in 1990 and is credited with protecting more than 500,000 acres throughout Wisconsin. When Governor Walker proposed freezing the popular fund in his 2015 budget, the legislators were among those who spoke up and created “across the aisle” support for conservation.

Kitchens stated he was proud of the role he was able to play and stressed the critical need for bipartisan support.

“Conservation is way too important an issue to be subject to the pendulum swing of politics,” he said. He went on to thank Gathering Waters, a “first-class organization,” for recognizing his work and the work of his fellow Republicans. He noted, “We don’t usually get these awards,” which elicited laughter from the crowd.

Burke and Kitchens met and forged a strong partnership in the fight to save the Stewardship Fund. Burke, who calls the effort a “galvanizing event,” organized a meeting of local conservation leaders to share the benefits of the KNSP with Kitchens. Kitchens in turn was able to provide valuable insight into the state budget process. According to Burke, “When Joel was endorsed by the League of Conservation Voters while running for office, we knew he’d be an important partner in this effort.” Kitchens is equally complimentary of Burke’s leadership. “When he held the meeting with me and the other conservation groups, we really got the ball rolling…I think it is safe to say that Door County made this happen.”

Both Burke and Kitchens agree that the effort to reinstate the Knowles-Nelson Stewardship Program, while arduous, has left conservation in the state stronger than it was prior to the challenge.

According to Kitchens, “Conservation benefits everyone, Republicans and Democrats alike. We’ve built some strong partnerships and it’s important to keep them going.”

While Burke and Kitchens took home the awards, it is clear that Wisconsin’s citizens, current and future, are the true winners.