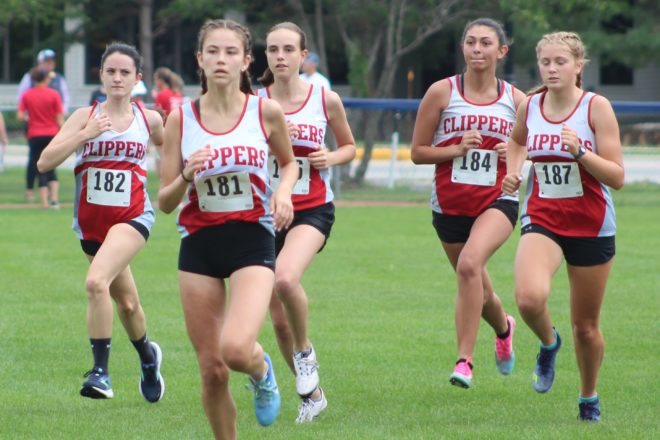 The high school cross-country season is underway, and multiple county teams have high hopes for the season ahead.

Sevastopol is looking to repeat as the girls Packerland Conference champions and also advance runners to the state meet.

“Our [WIAA Division 3] sectional has some tough teams, including Lourdes Academy and Valders, but the beauty of cross-country is every course is different, and each team has to show up on race day,” said Annie Kapolnek, who is in her third year as head coach.

In addition to the returning experience on the girls team, Kapolnek said the Pioneers also have a “couple newcomers who have potential to make a big impact in the top five on the team.”

“[The girls] are stronger than ever, with all upperclassmen and experience,” said Leanne Pinkert, who is in her sixth season as head coach. “Many put in the time this summer to run and be ready.”

Wienke is a two-sport athlete in the fall, when she is also a swimmer for Door County United.

Pinkert said freshman Claire Quaderer is expected to contribute to the team as well.

Following multiple graduation losses on the boys side, Pinkert said the team has only two athletes, with one returning senior, Elijah Pinkert, and won’t be able to score in the team standings.

Southern Door drops to Division 3 this year for cross-country competition.

Mike Collins enters his fourth season as head coach, with the Eagles returning a young squad from last season, when the boys didn’t have enough healthy runners to score in the team standings.

Back for the boys are sophomores Ben Grota, who finished 22nd last season in the Division 2 Kiel Sectional as the team’s top runner, as well as Lucas Conard and Brayden Vogel, along with junior Cody Penovich.

“When they can start off running varsity and be in their freshman or sophomore year, it serves them well for experience and improving in future years by the time of their junior and senior year,” Collins said.

On the girls side, Southern Door returns its top runner from last year, senior Brooke Strege, who opened this season winning the Chief Kahquados Invitational.

“She’s looking forward to doing very well in the conference, as well as qualifying in the sectionals for state,” Collins said.

Not only does Strege run cross-country, but this fall she is also on the Door County United girls swimming team.

“Between those two, she’s quite the athlete,” Collins said.

Collins said the chances for Grota and Strege to qualify for state this season look better with the Eagles now competing in Division 3.

Gibraltar has a new head coach this season in Tara Meinke.

Though the Vikings are small in numbers this year, Meinke said they have a positive attitude and camaraderie as strengths, with a goal to grow as individual runners.