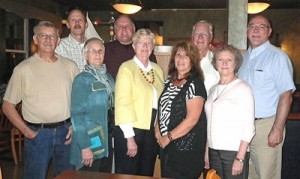 A delegation of 10 Door County ambassadors is headed to China this month to open the door wider on the sister city relationship with Jingdezhen, China.

“In the past the Chinese have sent full delegations to Door County, with a cross-representation of the community. Door County has sent one at a time. It’s our hope that sending a delegation representing the community as a cross-section will strengthen the sister city relationship,” said Bill Schuster, who leads the Door County Soil and Conservation department and was appointed in 2010, along with Bill Chaudoir, executive director of the Door County Economic Development Corporation, to head an advisory group on the sister city relationship.

“The relationship has been established, but there has not been a lot of participation from our side yet,” said Chaudoir.

“If this thing is going to survive, it has to have a broad-based community support,” Schuster said.

Jingdezhen is considered the pottery and porcelain capital of China, which is one of the reasons Door County wanted to establish the relationship, and the delegation will be there during the annual monthlong Jingdezhen International Pottery and Porcelain Festival.

“Jingdezhen was selected because of the commonalities, especially the strong pottery influence,” Chaudoir said.

Two potters – John Dietrich and Diane McNeil of Ellison Bay Pottery – are representing the Door County pottery community as members of the delegation.

The other members of the delegation are former Door County Board Chairman Charlie Most; retired Sevastopol teacher Mike Madden; Kent and Virginia Kruse; and the wives of Chaudoir and Schuster, Cheryl Chaudoir and Sonja Schuster.

Chaudoir pointed out that no government funds are being used for the trip. All the delegates are making the trip on their own dime.

After their visit to Jingdezhen, the delegates make their way to Dali in the foothills of the Himalayas to stay for four days at the Linden Centre, which is owned by Brian and Jeanee Linden, who are ambassadors for Chinese art in their Linden Gallery in Ellison Bay.

For more information about the Door County-Jingdezhen relationship, including a historic timeline, visit doorcountybusiness.com/news/china.