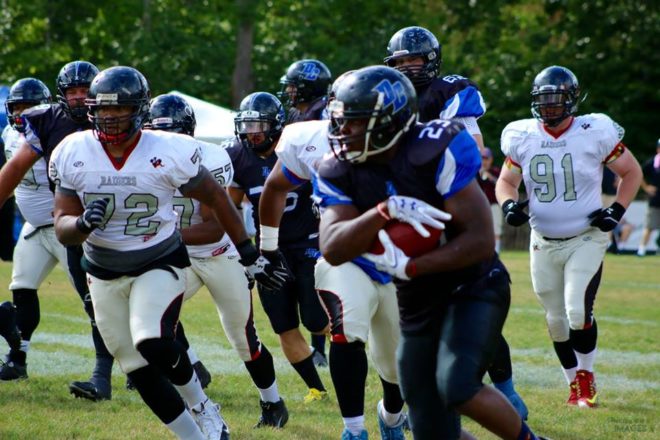 TaMar Scott rushed for 119 total yards against the Racine Raiders on Aug. 13 in Baileys Harbor. Submitted.

On Sept. 10, the Door County Destroyers will host the Milwaukee County Chargers in Round 1 of the 2016 Mid-States Football League (MSFL) Playoffs. Door County earned the #2 seed with a victory over the Muskego Hitmen in their final regular season game while the Chargers earned their #3 seed with a victory over the Racine Threat in their season finale.

This third matchup of the season is highly anticipated as the teams split their two regular season games, both winning on the road. Fans can expect a hard-hitting affair, as both teams’ defenses know how to get after the quarterback and disrupt the opposing offense’s timing.

Will the duo of Shannon King and Shaq Russell have time to connect against the blitz heavy Destroyers’ defense featuring Adam Brandt and Bryan Beachler?

These questions will be answered Sept. 10.

Kickoff is set for 3 pm at the Baileys Harbor Rec Park on Summit Road. Admission is $8 (includes a free drink), kids ages 10 and under are free.

As a special event, all active duty and veterans of the military are admitted to the game free of charge. The color guard will present the flag for the singing of the National Anthem and there will be recognition of all military in attendance at halftime. For more information visit doorcountydestroyers.com.