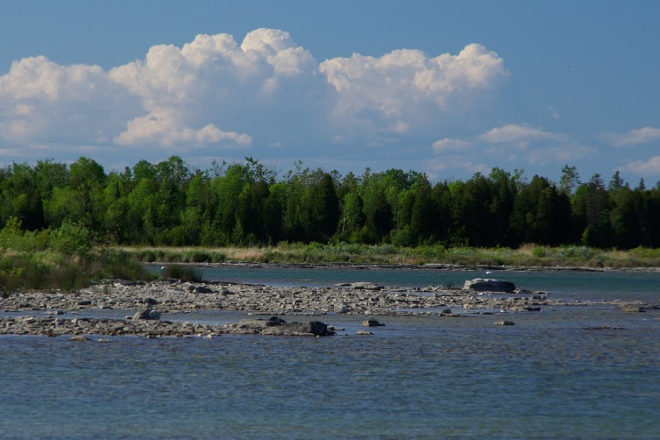 The Baileys Harbor Boreal Forest State Natural Area on the Door Peninsula protects several rare plants and animals and more than one and a half miles of frontage on Lake Michigan. Photo by Thomas Meyer.

On June 26, the Natural Resources Board accepted a 362-acre donation of Door County land that significantly expands recreational opportunities and protects a rare boreal forest along Lake Michigan. This forest harbors dozens of rare animals and plants, including some that are globally rare, and several species of wild native orchids.

This donation, from The Nature Conservancy, will expand the Baileys Harbor Boreal Forest State Natural Area (SNA) from its current 486 acres and open the new parcel to nature-based activities, including hiking, birdwatching, nature study and hunting. The conservancy used private dollars, a U.S. Fish and Wildlife Service grant and funds from the Knowles-Nelson Stewardship Program to acquire the land.

“We are especially pleased to donate this land to the state and the people of Wisconsin,” said Mary Jean Huston, who directs The Nature Conservancy’s work in Wisconsin. “The land is in the heart of the Baileys Harbor Boreal Forest and Wetlands State Natural Area, and it was a privilege for The Nature Conservancy to acquire this property in trust from Mary Henson, a dedicated conservationist. The land is bordered on all sides by land already owned and managed by the DNR; bringing it all together will allow DNR staff to manage the SNA more efficiently.”

The Baileys Harbor Boreal Forest and Wetlands State Natural Area is within the Door Peninsula Coastal Wetlands Ramsar site, a globally important wetland and designated as one of roughly 100 critical habitat areas for birds. Influenced by its location on the cool waters of Lake Michigan and the resulting local climate, the SNA is a landscape in which northern plants, animals and boreal forests can thrive far south of where they are normally found.

“Many birds depend on this area during the breeding season and as a stopover site where they can rest and feed during migration,” said Mike Grimm, a Nature Conservancy conservation ecologist based in Sturgeon Bay. “Birds like the red-shouldered hawk, wood thrush and Blackburnian warbler need large expanses of habitat, and the addition of this parcel to the State Natural Area will allow these birds and mammals with similar requirements to inhabit this part of Door County into the future.”

“The DNR is an experienced, skilled steward of many important conservation lands in Door County,” Huston said. “Their ability to manage the expanded Baileys Harbor Boreal Forest and Wetlands State Natural Area more holistically will help promote the recovery of rare plant and animal species. It will also protect groundwater-replenishment areas in nearby wetlands known to support the federally endangered Hine’s emerald dragonfly.”

“This is a tremendous gift to Wisconsinites now and in the future,” said Drew Feldkirchner, who leads the DNR Natural Heritage Conservation program that’s responsible for managing the State Natural Areas.

“We are grateful for the generosity and partnership of The Nature Conservancy. Their donation safeguards a truly unique property and expands opportunities for nature-based recreation and appreciation.”

With 1.5 miles of undeveloped Lake Michigan shoreline, the State Natural Area protects large populations of endangered and threatened plants and animals, including a wide variety of birds associated with boreal habitats, such as the yellow-bellied flycatcher, Blackburnian warbler and merlin.

The enlarged State Natural Area will be managed by the Natural Resources Foundation of Wisconsin, in part with funds from a generous endowment from Patricia Stocking. A 190-acre unit of the Baileys Harbor Boreal Forest State Natural Area was designated in 2013 to honor Stocking’s late husband, former Natural Resources Board member and chair Jonathan P. Ela, to commemorate his long career and accomplishments as an environmentalist, according to Jim Lemke, DNR real estate section chief.

In other action, the board also approved land donations that will enlarge the Rush Creek State Natural Area in Crawford County to safeguard rare bluff prairie along the Mississippi River and the Ferry Bluff State Natural Area to benefit wintering bald eagles in southern Wisconsin.