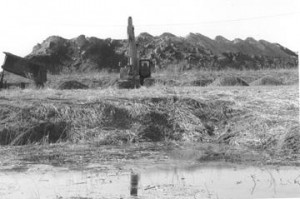 The collection site for toxic sludge at the Pulliam Power Plant in Green Bay, notice the water-filled ditch in the foreground of the photo.

In addition, these revisions respond to a January 2007 citizen petition that requested the department and board conduct rulemaking proceedings to revise and adopt rules that require a 90 to 95 percent reduction of mercury to the air from coal-fired electric generating units in the state by Jan. 1, 2012. A mercury reduction of 70 percent must be achieved by Jan. 1, 2015, and beginning Jan. 1, 2018, another interim reduction of 80 percent is required.

Under this requirement the state’s four major utilities – Alliant Energy, Dairyland Power Cooperative, WE Energies and Wisconsin Public Service Corporation – must reduce mercury emissions from their existing coal-fired electric generating units by 40 percent from the baseline established under provisions in the current rule.

While all of these new requirements are taking a close look at the regulations for airborne emissions from coal-fired units, the prospect of mercury and other toxic pollutants getting into our surface waters by other means is basically being overlooked.

At the Wisconsin Public Service (Pulliam Plant) coal-fired generating facility in Green Bay, it’s possible to see a mountain of fly ash and scrubber sludge that has been accumulating for decades. While a considerable amount of the waste material is used in construction and concrete as an aggregate, or in some instances is marketed as synthetic gypsum, the rest remains in a huge depository adjacent to the plant.

There is no visible containment berm around this dumping area. The distance to the waters of Green Bay is less than 1,000 feet, and a dense growth of phragmites is the only barrier against water run off into the bay.

An argument is made that this waste material is inert and harmless, but there is scientific proof to the opposite, as several hazardous metals and chemical residues remain in the fly ash and scrubber sludge. Scrubber sludge is the residue that remains after the electro-static precipitators collect particles from the inside wall of the large smoke-stack. It’s then washed down with water to create a sludge mix.

This material, then combined with fly ash, is trucked to the nearby collection site, creating a small mountain of stored toxic materials, which have been condensed in the burning process. Studies have shown that this toxic mix contains lead, arsenic, barium, chromium, plutonium, and mercury. With direct access to the waters of Green Bay, any possible leaching from this storage facility can only add to the other dangerous threats already apparent in our surface waters.

Last year, DCEC joined litigation with other statewide groups to force Wisconsin Public Service Corporation to follow already mandated airborne emissions controls, which being unused had caused the utility to be in violation continuously since 1999.

Must we again take legal action to protect the surface water from still another threat that is occurring needlessly?

It’s all about making money for stockholders, with a seemingly passive concern about direct effects on our precious surface waters.