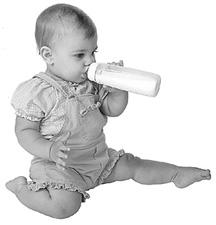 The nasty chemical bisphenol A (BPA).

You may never have heard of the chemical BPA, but odds are it’s circulating in your body. BPA was found in 93 percent of the 2,517 Americans, age six and over, tested by the U.S. Centers for Disease Control and Prevention in a recently released study.

How much exposure to BPA – which is used in the manufacturing of polycarbonate plastics, such as clear, hard water bottles and baby bottles, as well as in making resin coatings for the linings of cans – is acceptable is at the heart of a debate.

A new report on the matter from the U.S. National Toxicology Program is expected by summer, and a congressional committee inquiry is also under way. This inquiry will examine risks of BPA ain canned infant formula and will check into how much influence the plastics industry has had over previous research and conclusions.

With widespread use in cans and many plastic containers, the chemical enters the body when it leaches from those containers into food and beverages. Although this usually occurs at very low levels, it can happen, especially when products are heated. Whether this exposure poses significant risks to human health has been hotly debated.

The current daily upper limit of BPA that the U.S. Environmental Protection Agency calculates is safe is 50 micrograms per kilogram of body weight, but that standard is based on experiments conducted in the 1980s, before a flood of new studies emerged suggesting that serious health risks could result from much lower doses based on experiments in laboratory animals and in human cells.

Some studies showed adverse health effects from exposures of only 0.025 microgram per kilogram of body weight per day, yet a polycarbonate bottle with room-temperature water can leach 2 micrograms of BPA per liter. A three-month-old baby drinking formula from a polycarbonate bottle may be exposed to as much as 11 micrograms per kilogram of body weight daily.

The European Food Safety Authority recently concluded that the 50-microgram safety standard is sufficient. But a panel of 38 experts from around the world convened by the National Institutes of Health (NIH) disagreed. Their review of hundreds of studies over the past decade suggested a connection between exposure to BPA at levels typical in the U.S. to increased rates of breast and prostate cancer, reproductive system abnormalities, and, for exposure in the womb, problems such as attention deficit hyperactivity disorder, obesity, and diabetes.

The report says people in developed countries typically have measurable blood, tissue, and urine levels of BPA that exceed the levels produced by doses used in the “low-dose” animal experiments. Infants and fetuses may be especially vulnerable to any health effects from BPA.

The U.S. House Committee on Energy and Commerce is looking into the safety of infant formula cans lined with products containing BPA and is examining whether the proponents of BPA have paid consulting groups to engineer science that reaches predetermined conclusions.

A 2006 review published in the peer-reviewed journal Environmental Research showed that of 119 government-funded studies conducted as of July 2005, 109 found harmful effects from low-dose exposure in animals. By contrast, 11 industry-funded studies said that BPA causes no harm.

What You Can Do

While studies are under way, if you’re concerned, here’s what you can do:

• Identify which containers might have the chemical. Polycarbonate is usually clear rather than cloudy, although it may be colored. If the container carries a recycling code, it will be marked with the number 7 or the letters “PC,” or both. Number 7 bottles made with BPA-free polyethersulfone (PES) won’t have the PC marking. Other BPA-free plastic alternatives include polyethylene, which may be marked with recycling codes 1 (PET) or 2 (HDPE), and polypropylene, 5 (PP).

• For baby bottles, glass or BPA-free plastics such as polyethylene are the safest choices, as Consumer Reports has advised in the past.

• For those who reuse water bottles frequently and want to avoid BPA, consider polyethylene, stainless steel, or aluminum with BPA-free liners.

The information found within this column was condensed from a congressional report. For more information contact DCEC at 920.743.6003 or visit http://www.dcec-wi.org.