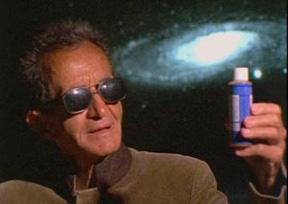 Emanuel H. Bronner was the scion of a Jewish soap-making family whose stern, authoritarian father perished in a concentration camp in Germany. Bronner settled in the United States, but his eccentric beliefs landed him in an Illinois mental hospital for nine months before he escaped and eventually became a socially conscious, eco-friendly purveyor of soap products, bearing his name and philosophical musings. Dr. Bronner’s Magic Soap Box seeks to understand the nature of Bronner and where his self-made philosophies concerning Halley’s Comet, Mark Spitz, and Albert Einstein began.

Soapbox is equally concerned with the more unassuming figure of Bronner’s son, Ralph, a sweet-natured individual who proudly carries on his father’s humanistic legacy despite suffering parental abandonment. Donating money and free bottles of soap, Ralph is nearly as unforgettable as his iconic father, albeit in a much more gentle fashion.