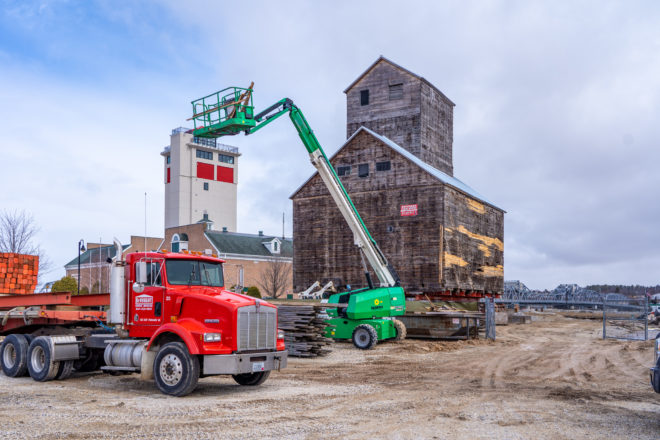 The Door County Granary was moved 80 feet forward to its final resting place in April of this year. Photo by Rachel Lukas.

As part of the 11-month development-agreement extension the Sturgeon Bay Common Council granted in early May for the Sturgeon Bay Historical Society Foundation (SBHSF) to finish the restoration of the Teweles and Brandeis grain elevator, the council heard its first update June 21 on how the work on the Door County Granary is progressing.

The extension, which was granted because of delays in obtaining construction materials, calls for the project to be “substantially completed” no later than April 30, 2023.

SBHSF president Laurel Hauser and Granary project manager Nicole Matson appeared before the council to provide the update. Hauser said 31 of the Granary’s original 12-foot-high columns were sent to Tennessee to be refurbished.

Hauser said Immel will also be building shear walls to allow the Granary’s top two layers to be attached so that it can once again be 75 feet tall.

“We’re really looking forward to that in the coming month to two that it will take for them to finish that project,” she said.

In addition to the Granary receiving $100,000 from the 1923 Fund, Hauser said U.S. Sen. Tammy Baldwin has recommended the Granary for some federal funding in fiscal year 2023.

“We don’t know what happens with that, but it’s nice to be on the recommended list,” she said.

Hauser said the SBHSF continues to raise funds for the project.

In response to questions from council members who asked why no work was going on at the west-side project site during recent weeks, Hauser said that’s because the columns are being worked on elsewhere.