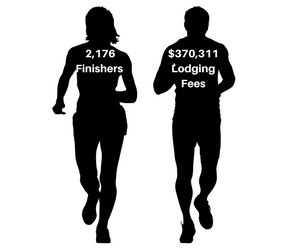 When the Door County Half Marathon ends May 6 and its 2,200-plus participants go home, they’ll leave hundreds of thousands of dollars in economic impact behind.

The race, conceived in 2007 as a way to boost shoulder season tourism and celebrate the Door County community as the busy season ramps up, quickly became a spring economic engine. Nearly 92 percent of runners come to the race in Peninsula State Park from outside Door County, with 25 percent from the Chicago area alone.

Those runners fill hotel rooms, fuel up on beer, burgers and pasta before and after the race, and top off their gas tanks at local stations before they head home. All this spending comes on a weekend that was once quiet on the Door Peninsula.

Myles Dannhausen Jr., the course director of the Door County Half Marathon, says the most important number to him is the number of first-time visitors the race attracts.

“Each year six to 10 percent of our runners say they are making their first-ever visit to Door County,” Dannhausen said. “To me that’s huge, because it means that about 200 people are getting their first taste of Door County in the best way possible, by experiencing Peninsula State Park, our most beautiful asset. They’re also meeting a community that’s really happy to see them after a long, quiet winter, in a race where more than 200 local residents and business owners come out to volunteer. It’s a great way to create lifetime traditions of visiting Door County.”

Registrations for the 10th running of the Door County Half Marathon are currently up nearly 10 percent during the same time in 2016. Both the half marathon and the 5k are more than 80 percent full as of March 10.

To learn more about the race, volunteering, and to sign up, visit doorcountyhalfmarathon.com.

By the Numbers: A Runner’s Impact

Percent of runners who were female

Percent of all runners who came from outside Door County

Percent of runners who rented overnight lodging for race weekend

Number of runners who have finished the race in nine runnings