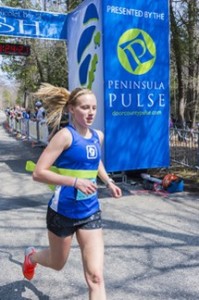 It was a beautiful morning on the Door Peninsula May 2 as thousands of runners and spectators gathered at Peninsula State Park for the Door County Half Marathon and Nicolet Bay 5k.

“It’s my first half marathon of the year. It was a tough course so I’m happy with my time and obviously my place,” Knurr said. “It was a fun race.”

Finnel, a Forestville native and current Madison resident, said the course was a great way to start the season and to get back to the area, even though the inclines proved challenging.

“I love the park, love coming back home, so for me it was just a nice transition from doing 5ks, 10ks,” Finnel said. “[The course] was challenging. It starts out pretty flat and then four-to-five is really hard because of that long, gradual 450-foot hill. A lot of rolling hills but I think I did alright with it today.”

Taking on the men’s and women’s top spots for the 5k were Dustin Hudak and Liz Gilbert, respectively. Hudak placed first with a time of 17:20 and Gilbert took the top female spot with a time of 19:05.