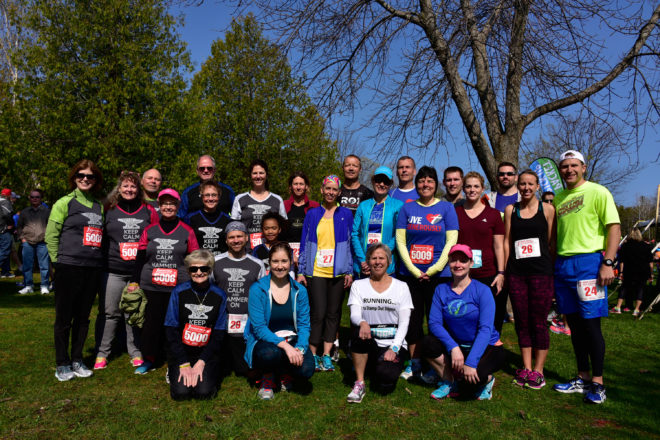 2016 Run for a Cause Participants. Photo by Len Villano.

As runners lace up for the 10th running of the Door County Half Marathon and Nicolet Bay 5k on May 6, 2017, at least a couple dozen will do it for more than the great route, beautiful scenery and health benefits that the event in Peninsula State Park has become known for. They will do it for a charitable cause, with help from the event’s annual Run For A Cause charity program.

In exchange for raising at least $250 for an area nonprofit, up to 100 runners are given free entry to the Door County Half Marathon or the Nicolet Bay 5k. Since its inception in 2010, Run For A Cause participants have raised $114,239 for more than 70 Door County charities supporting lives, the environment and the arts.

These dollars have beefed up endowment funds, purchased new equipment for area fitness and senior centers, and supported individuals battling life-threatening illnesses. The impact of the program has been felt in all corners of the peninsula by people of all ages.

Participants can opt to support a charity individually or charities may solicit a team of individuals (often employees and volunteers) to run on their behalf. Such is the case with Team Forge, of The Clearing Folk School in Ellison Bay, which has participated in Run For A Cause the past three years, raising more than $28,000 for construction of the school’s blacksmithing and metal craft workshop.

Ironically, The Clearing’s Assistant Director Erik Rinkleff established a team for the half marathon and 5k in 2013 with the intention of fundraising for The Forge, unaware that Run For A Cause existed. While the four members of Team Forge raised $3,800 that year, Rinkleff points out that the support and promotional efforts of the half marathon’s organizers has allowed the team to set and exceed its fundraising goals every year.

By working closely with their nonprofit, Team Forge draws support not only from team members’ family and friends, but from the folk school’s network of volunteers, students and supporters. Individual team members spread the word to meet their individual $250 mandate and The Clearing helps with the rest.

“We do a lot of promotion as The Clearing itself,” Rinkleff explained. “We send out e-blasts and people will donate that way. There are people that say, ‘I’ll never take a class at The Forge but you guys are great. I love what you’re doing. You’re crazy for running. You all deserve it. Here’s $50.’ It’s fun to see those donations come through with little messages of inspiration.”

Although the mission of their namesake has been achieved, Rinkleff said Team Forge does not plan on stopping anytime soon. By December, he had verbal commitments from 16 team members and had set a fundraising goal of $12,500 for 2017. Funds raised will support projects and scholarships at The Clearing.

“It’s another way for people to participate in an event here at The Clearing,” Rinkleff said. “Any time you can do that, you can get people that might not be here for any other reason than for that, it’s a good thing. We have a lot of people that volunteer with specific things but this is kind of a different way to participate.”

At Scandia Village senior living community in Sister Bay, the Run For A Cause program has supported residents at all stages of care. In 2010, 2011 and 2013, Scandia Village put forth a team of runners that, over the course of three years, raised more than $7,600 to meet the immediate needs of its residents and support its $8 million capital campaign for campus additions and remodeling. 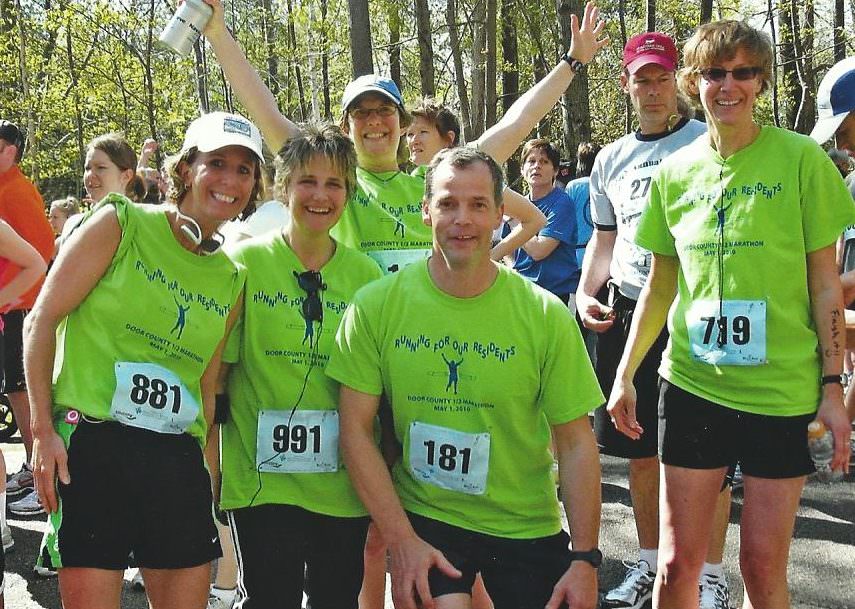 Participants of the 2010 Run For A Cause program on behalf of Scandia Village were (from left) Nicki Scharrig, Michelle Stoeckel, Joy Zakrzewski, Rich DeMeuse and Michele Notz. Submitted.

“We tried to focus on each area and the needs in each area,” explained Nicki Scharrig, Scandia’s Director of Resource Development and Marketing, and Volunteer Coordinator, and a member of its Run For A Cause team. “We have a multilevel campus here which is a continuum of care, all the way from apartments and villas all the way through to 24-hour nursing care so we identified a particular need, such as a big screen TV in one area and then window treatments in another area and then an aromatherapy unit in our care center so it was just a nice way for us to make sure all the residents would benefit.”

While Scandia Village employees and volunteers reaped the health benefits of training for, and running in, the events, the team also earmarked funds to contribute to the health and wellness of Scandia residents by purchasing new exercise equipment for the center’s wellness campaign.

Although those few thousand dollars may seem like a drop in the bucket of their $8 million campaign, Scharrig lauds the value of the Run For A Cause program and its ability to raise awareness for Scandia Village’s ongoing fundraising efforts.

“Every penny we take in matters. It’s going to benefit our residents and their quality of life through all of this,” she said. “It doesn’t matter if it’s a penny or a thousand dollars, it’s one step closer to them having that private room that’s so important for them to have their dignity and have their privacy. One donation is never more important than another, we’re just so thankful for every one we get.”

The Door County Half Marathon has partnered with the fundraising website CrowdRise to make it easier for Run For A Cause participants to set up a charity team and accept online donations. For more information on Run For A Cause, visit doorcountyhalfmarathon.com/charity/.

The 2017 Door County Half Marathon and Nicolet Bay 5k take place on May 6 in Peninsula State Park.