She has come to love the course, which plays to her strength as a strong hill runner. When she goes for her third win on the course, she’ll be in the midst of a strong spring that she hopes will take her back to a sub-three-hour marathon time at the Green Bay Marathon. 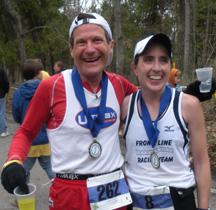 Roy PirRUNg and Laura Ankrum share a laugh after finishing the first Door County Half Marathon in 2008.

We caught up with her in February to talk about her evolution from a top-flight collegiate competitor to running as a career woman and mother.

A young start: Ankrum got her start when Linda Ferguson, her elementary school teacher, encouraged her and some friends to run around the school before class. As high school students at Lakeville High near Flint, MI, those friends competed together at the Michigan State Track Championships.

Collegiate competitor: Ankrum was just warming up. She continued her competitive career at Michigan State University, running the 10,000 meters. In her final year at MSU she was named Academic All-American and ranked 11th in the nation.

Finding time: “You need to be flexible,” Ankrum says of training while raising a family. “I had times when all I did was run, but I don’t have that intensity any more. I’ve learned to be creative with my workouts. I’ve been doing more cycling in recent years, more cross training. When my kids were small I ran with a red running stroller.”

Embracing the hills: “You have to know how to take advantage of them if you can,” Ankrum says. “You do a surge, start to build a lead on a hill. That’s a pretty big psychological edge. There’s a bit of mental strategy that goes into it.”

Training through Wisconsin winters: Ankrum says she’ll run in any weather, and enjoys the rural roads of northeastern Wisconsin, but for speed workouts in the winter she turns to the treadmill. “It’s hard to find someone to pace with,” she says. “And it’s hard to do speed workouts on icy or snow-covered roads.”

Favorite races: “The Door County Half Marathon is one of my favorites; I like having no traffic, running through the park. It has great views, the right mix of hills and straight-aways. I like hills, and it has some pretty good ones. The Bellin Run is great too. It brings in some of the elite runners and the pros that come in are open with everyone and friendly.”

New goals: Ankrum used to check out the competition at the starting line, and though she’s still highly competitive, the family life has shifted her focus. “I used to do 60 or more miles a week, but I haven’t trained at that level since I had kids [three boys, age 8, 6, and 3],” she says. “Now I get 30 – 40 in. I’m getting close to 40, and I’m pushing my mileage back up to get back under a three-hour marathon, where I was 10 years ago.” She doesn’t have too far to go – Ankrum ran 3:01 at the Fox Cities Marathon in 2010.

Why I run: “I just always enjoyed it,” she says. “You can do it anywhere, and it was such a great stress reliever through medical school and my residency.”