Dr. Phil Arnold fills most of his calendar as a family doctor with North Shore Medical Clinic in Door County, finding an avenue for his sports medicine expertise by helping provide care and treatment to the peninsula’s high school and amateur athletes. But for a week in March he found himself a far cry from the fields and gymnasiums of Door County, working with some of the world’s best athletes in a much different venue – the Alps of Italy. 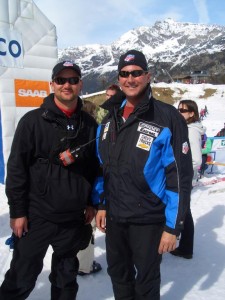 Arnold, Medical Director for this weekend’s first Door County Half Marathon, took some time away from his daily routine to join the United States Freestyle Ski Team in Valmalenco, Italy, serving as the attending physician for the team’s final World Cup event of the 2008 season.

The 39 year-old rural Baileys Harbor resident was taking in the Fish Creek Winterfest parade in February when he got a call from Dr. Gunnar Brolinson, head of the Sports Medicine at Virginia Tech, where Arnold completed his Sports Medicine Fellowship. He had an intriguing offer for Arnold if he could change plans on short notice.

“He was supposed to go Italy for the World Cup, but he was buried in research projects,” Arnold said. “So he asked if I wanted to take his place.” 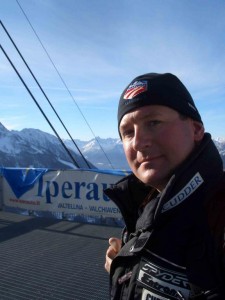 Brolinson, a member of the ski team’s medical pool, said Arnold was deserving of and prepared for the opportunity.

“I can honestly say he’s one of the most outstanding fellows I’ve ever had,” Brolinson said, adding that while Arnold is extremely well-respected by his peers and posted excellent scores as a student, it was a different quality that made him a good fit for the ski team.

“None of that stuff really matters if it doesn’t translate into quality care for people,” he said, “and I think anyone who knows Phil knows how great he is at caring for people.”

Arnold didn’t hesitate to leap at the opportunity, and five weeks later he was stuck in a snowstorm near Lake Como, Italy trying to make it up a mountain pass with the freestyle ski team. Eventually they reached their destination, where Arnold had a broad job description.

“You’re with the team all day and available for anything they need,” he said. “That could include taping or working out a kink in an athlete’s neck, but it could also mean fighting off illness or serious trauma care.”

Arnold worked with the team’s full-time Athletic Trainer, Justin Hunt, AT-C, who stressed the importance of flexibility of both skills and personality for doing the job well.

“The position’s pretty important because you run into so many issues being overseas,” he said. “It makes a big difference how the physician approaches people, and Dr. Phil fit in great. He’s got a go-with-the-flow personality, which is important in a place where conditions change daily, even hourly.”

Brolinson said adaptability is essential on the mountain.

“You find yourself working with people who have to perform at the absolute highest level in less than ideal conditions,” Brolinson explained. “They’re eating foreign food, in unfamiliar conditions, so you have to think on your feet.”

Arnold’s experience in expedition medicine, in which one has to treat injuries in remote locations and at high altitude, is another skill that makes him a good fit for the squad. A certified kayak instructor who loves the outdoors and adventure travel, Arnold has participated in two mountain expeditions as the adjunct medical officer with Mountain Vision Trekking and Climbing Adventures, a travel company based in Denver, and will add a third in December when he will climb Mount Aconcagua in Argentina.

When the attending physician’s stint with the team is over, he is evaluated by the team, and if he receives a positive review (which Arnold did) he gets invited to Beaver Creek, CO for the US Ski Team’s MESS (Medical Emergencies in Skiing and Snowboarding) Course and a slot in the medical staff pool for future events. They don’t, however, reap a financial reward.

Working with the ski team is a volunteer opportunity. The team put Arnold up and fed him in Italy, but he received no pay and had to foot the bill for airfare, as well as take the time away from his practice in Door County. What the physician gets is an opportunity to work with some of the best athletes in the world in an amazing setting.

Arnold, an avid photographer, took the opportunity to get dozens of photos and video of the athlete’s runs, warm-up routines, and preparation techniques. He came away enamored with the approach and personalities of the athletes.

“These skiers are unbelievable physical specimens,” he said. “Their endurance, strength, mental focus, determination, and nutrition are incredible. These are the top 25 men and women freestyle skiers in the world.”

Yet for all their competitiveness and achievements, they lived up to their reputation as an easy-going, fun-loving group.

“I was surprised how down-to-earth all of them are,” he said. “They’re so supportive of each other and the other international athletes. They just welcome you into the family.”

Back home at North Shore in Door County Arnold is used to seeing high school athletes and elderly patients, but he said it’s surprising how little difference there is between treating the 16 year-old who wants to get back in a junior varsity basketball game and the world-class skier on a mountain in Italy.

“Athletes are athletes,” he said. “Certainly at the World Cup – something they’ve trained their whole life for – if you’re in doubt, you’re going to do all you can to get them back out there. But their health and safety always has to come first. I always ask athletes two questions when determining return to play guidelines: First, can you protect yourself with this injury? If the answer to that is yes, then with this injury, are you able to merit your presence on the court, field, etc.? If the answer to both questions is yes, they go back in.”

Arnold, dual board certified in both family medicine and sports medicine, has worked major races and events in the past. In addition to working Division I Atlantic Coast Conference competition while serving his fellowship at Virginia Tech, he volunteered at the Marine Corps Marathon in Washington D.C., and has worked the U.S. Judo Championships. As the half marathon’s medical director, his job is to help coordinate medical coverage for the inaugural event, preparing and staffing aid stations, the central medical tent, and formulating procedures.

Though hydration issues and musculoskeletal injuries are the primary concerns in an endurance race, Arnold said “there’s always the chance something catastrophic could happen.”

So he and the medical team prepare for all possibilities.

“In an event like this you’re thinking about heat stroke, cardiac arrhythmias, and people who just aren’t physically ready,” he explained. “Seasoned runners tend to have a strategy. They know the course, they eat well leading up to the race, and they know their body and how it’s reacting as the race progresses. The less experienced runners are the ones we keep a closer eye on, but that’s the nice thing about a race like this, because half marathons and 5ks are good, safe ways to get introduced to endurance running.”

Eight aid stations will be placed along the 13.1-mile course, each staffed with an athletic trainer and/or an emergency medical technician, and volunteers handing out food and water.

Arnold said he’s been impressed with the organization of the first-time event.

“The organizers have really thought of everything. The attention to detail has been incredible. The Door County community has also been very generous with donations of time and resources and, of course, Peninsula State Park has to be commended for allowing us to make this a closed course and a safe race. It’s that whole idea that if you put it on well the first time word will spread.”

And if you don’t, you may not get a second chance to fix it.