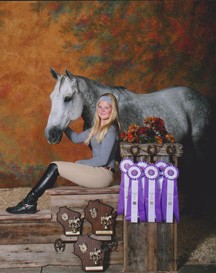 Hanna Michalsen won numerous awards at the 4H Wisconsin Expo, including the top prize for the Hunter under Saddle category. Photo submitted by Sue Daubner.

In September, 13-year-old Gibraltar student Hanna Michalsen entered the 4-H Wisconsin State Expo in Milwaukee, where she won the Grand Champion in Hunter under Saddle, top 10 in Trail and top 10 in Western Horsemanship.

In June 2013, she also took part in the 4-H Wisconsin State Jumping and Dressage Show in Plymouth, Wis. She came away with trophies for Grand Champion in Equitation over Fences, a Reserve in Hunter under Saddle and four top 10 awards.

Michalsen has been involved in equestrian pursuits from a very young age. She is fortunate enough to have a live-in trainer (her mother, Maia Michalsen), but Hanna’s discipline and hard work have proven her to be an exceptional rider.

Other Door County riders who also garnered accolades at the 4-H Wisconsin State Expo are: