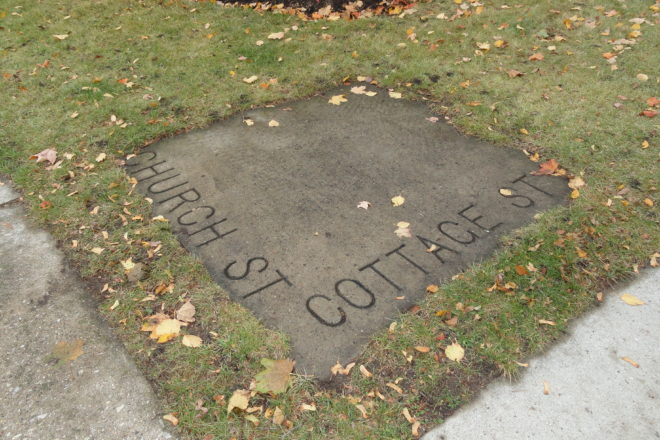 Did you ever notice the sidewalk stones on street corners with names cut into them? Did you know that these were the pre-1943 street names? Most of Sturgeon Bay’s street names were changed in that year. The city was bustling with new residents who had moved to Sturgeon Bay to work in the busy wartime shipbuilding industry. New homes and apartments had been built in the Sunset and Sunrise subdivisions. The city was expanding rapidly, and according to a newspaper clipping from 1942, “names of streets and numbering on houses are becoming somewhat of a confused mess. There are hundreds of houses in the city that have no number, streets that are but a block or two long, and names which mean nothing to one who is trying to direct someone to certain places in the city.” Before 1943 street names had been incised in the cement of the corner blocks of the sidewalks, probably in place of street signs. Some prominent residents also had their names placed in the cement blocks in front of their homes. The marked corner stones have endured, but during the last few years, many have been removed due to reconstruction of the sidewalks.

The Door County Historical Museum and Archive staff has begun a project to identify and photograph as many of the remaining corner blocks as possible and would appreciate the community’s assistance. If you live near any of them, or are aware of some you see as you are walking around town, your help is appreciated.

The project started this fall and will continue in the spring. Next summer, 75 years after the name changes, there will be a display of photos of named blocks (with the current street names) and older homes that stand on the corner near them. Some homeowners/businesses have salvaged the blocks being removed and have used creative ways to preserve the stones.

If you know the location of any of the stones, email [email protected] or call 920.743.5809 and leave a message as the museum is closed to the public for the season.