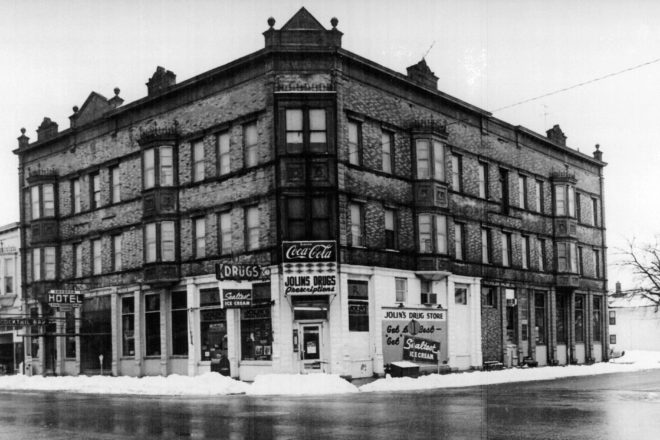 Almost a century of lodging in Sturgeon Bay took place on this corner, beginning in 1868 when the three-story Northwestern House opened to the public. It included a large dance floor on the upper floor, five sample rooms for visiting salesman to show off their wares to potential customers, a barber shop, a harness shop and two barns for stabling teams. The Northwestern was heated by 22 stoves. It had no plumbing or electricity. The Northwestern was destroyed by fire in July 1893. A new hotel was erected in its place, opening in 1901 and named the Hotel Waldo after one of the principal’s sons. It had 54 rooms and at 3½ stories, was the largest hotel in Door County. It also had two dining rooms – one serving “home style” meals for the local working class and the other serving meals by courses for guests. Sunday dinners were a specialty of the Waldo. The hotel changed owners several times, including in 1919 when two men bought it, one of whom was named Thomas Swoboda. It then became the Hotel Swoboda. In 1947 the Swoboda was purchased by Ferdinand and Alyce Lindgren of Minnesota. By then the hotel had a bar, telegraph office and drug store with a soda fountain. The Lindgrens’ grandson, Bob Papke, delivered telegrams for the telegraph office. “My dad died when I was seven years old and my grandparents helped raise me,” Papke said. “I was down by their hotel almost every day and would play in and around the hotel and downtown Sturgeon Bay. This was my neighborhood.” In the mid-1960s, the hotel was purchased by shipbuilder Fred Peterson and razed in the spring of 1967 for the construction of the First National Bank of Sturgeon Bay. Today it is the site of Associated Bank at 57 N. 3rd Ave. Photo submitted by Bob Papke.