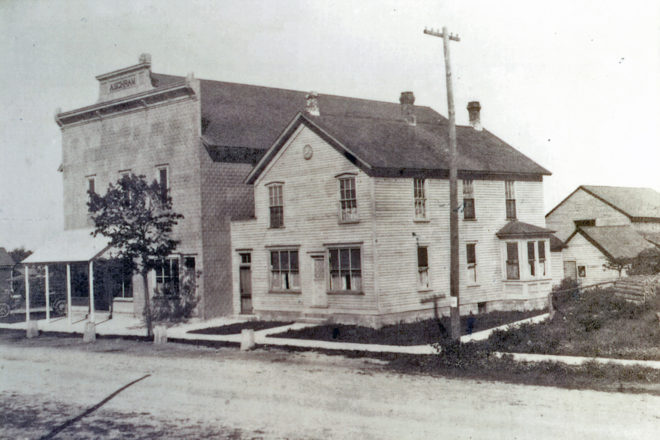 The building originally known as Schram Hall in Baileys Harbor celebrated its centenary in September 2008, although in 2008 and now it is two separate businesses – Harbor Fish Market & Grille and Custard’s Last Stan. The building was erected in 1908 by August Schram, who operated a tavern and dance hall. August died from a tooth infection at the age of 36 in 1917. His wife, Mary, eventually remarried John Wasserbach, and together they operated an ice cream parlor in the smaller building and lived above it. Next door was Wasserbach’s Tap. They also continued the tradition of the dance hall and showed movies on Sunday nights. In 1984 the building was bought by Peter and Mary Charles, who turned it into a full-service restaurant known as The Frontier Saloon. In 1997 the building was sold to Carl and Karen Berndt, who turned it into the Harbor Fish Market and Grille. Read more about the building’s history here. Photo from the Door County Historical Museum, 18 N. 4th Ave., Sturgeon Bay. Open 10 am – 4:30 pm daily, May 1 through Oct. 31.