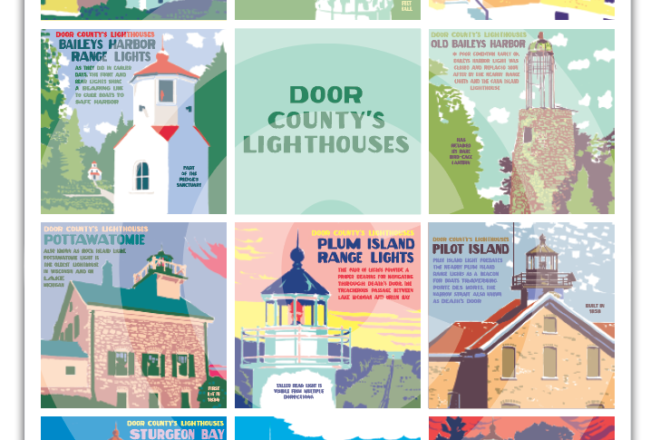 What had been streaks of color dashed across a computer screen became the outlines and details of the peninsula’s state parks and abundant lighthouses when Ryan Miller, creative director for the Peninsula Pulse and Door County Living, designed posters to celebrate the areas Door County is well known for. Once transferred to paper, these vibrant colors now remind locals and visitors alike of their favorite Door County spots.

Miller started the project to promote the Pulse’s 2017 Sustainability Issue, detailing Door County’s five state parks and its love of open spaces. He chose images that most people would recognize, though the process was ultimately quite spontaneous.

Miller created the drawings freehand on the computer, working from his chosen images for guidance. Being very familiar with Photoshop made it a simple and quick process: he completed the posters within two weeks to meet the Sustainability Issue’s deadline.

“I just use the tools on Photoshop and draw away,” Miller said.

Because the state-park posters were so well received, the Pulse team decided to honor more icons of Door County: its lighthouses. Miller began creating a poster for the lighthouses, which will soon be available in postcard form. Time wasn’t a factor for that project, so it took a month or two to complete.

The new poster includes all 11 of the county’s lighthouses, paired with facts about each – details that a historian from the Door County Maritime Museum in Sturgeon Bay verified.

“They’re a continuation of the state-park pieces to promote historical Door County and conservation,” Miller said. “A lot of the lighthouses are on historical sites or national sites.”

Though I saw connections to his personal work, Miller said he was more inspired by the national-park posters of the 1930s and ’40s that were issued by the Works Progress Administration, a program of FDR’s New Deal that was renamed the Work Projects Administration in 1939.

The program hired the unemployed for public-works projects that included constructing buildings and roads, but it also hired musicians and writers. Lots of posters came out of it, too, the most iconic being images of the national parks.

The art technique is called, fittingly, posterization, in which there are distinct, flat areas of color and tone.

Because the state parks and lighthouses are such icons of Door County, Miller wanted to be sure he was capturing the true meaning and essence of each scene, but he didn’t allow himself to stress about it. He believes in more of a “Don’t stop until you’re satisfied” technique.

Miller himself enjoys what Door County has to offer, spending most of his free time biking and running in Peninsula State Park – his favorite if he had to name one.

“They’re all cool, but I think Peninsula’s kind of special,” Miller said.

The posters – and soon postcards – are available for people to buy and enjoy, reminding them of some of what they love most about Door County.