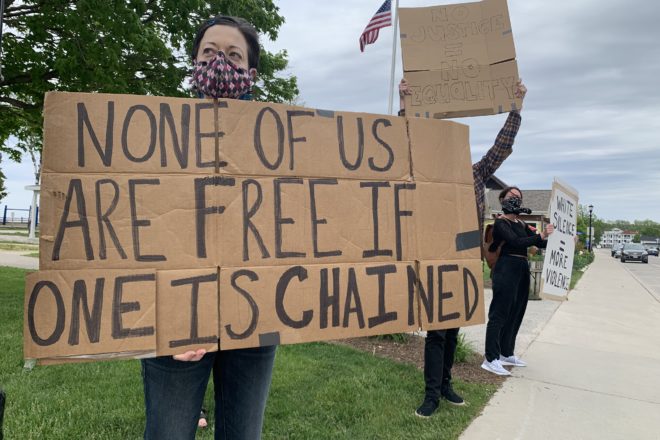 A protester in Sister Bay holds a sign supporting the Black Lives Matter movement on the first day of protests in this June 2020 file photo by Myles Dannhausen, Jr. Protests would continue throughout 2020 across the peninsula.

Early 2021 marked a year into a global pandemic and nine months since the first Black Lives Matter protests erupted in communities across the country, including in Door County, following the murder of George Floyd by police officer Derek Chauvin. In April 2021, Chauvin became the first white Minnesota police officer to be convicted of murdering a Black person.

Set against that backdrop, the Door County Board of Supervisors adopted its Vision of Diversity, Equity and Inclusion resolution in March 2021. Racism as a public-health crisis drove that resolution’s birth, but the final document acknowledged the many ways in which equity and inclusion are not achieved in society, including age, disability, gender, gender identity and expression, nationality, ethnicity, parental status, race, religion, socioeconomic status and sexual orientation.

The Wisconsin Counties Association advises that counties examine inequities that are unique to them to inform their local diversity, equity and inclusion (DEI) measures. Door County has been doing an internal study of DEI practices and service delivery and is now about to embark on an exploration of the community as a whole.

The Door County Administrative Committee is expected to sign a contract with Northeast Wisconsin Technical College (NWTC) during the committee’s May 17 meeting, according to Ken Pabich, Door County administrator. NWTC has a business and training arm for community inclusivity.

“A large part of it is conducting a survey analysis,” Pabich said. “That’s really going to be data collection and trying to understand the issues in Door County with statistically reliable surveys and tools.”

From that, a strategic plan would be developed with action items and outcomes. The process is expected to take about a year.

“There are other counties that have formed DEI committees and haven’t been successful, not because they reacted to last year [2021], but because they didn’t have a clear mission,” Pabich said.

The need for a facilitator to guide the process and the development of a strategic plan became clear after Pabich convened a general working group of community stakeholders who met a couple of times during the past year. The next step following the contract approval will be formalizing a committee and official project kickoff in late May or early June, he said.

Pabich said they fully anticipate that some DEI challenges will be illuminated during the process, with issues particular to a less diverse, more rural place such as Door County expected to surface. The county’s aging population, for example, will likely be one group lacking equitable or inclusive access to services, along with those on the low-income side of the socioeconomic divide.

“That may not be what everyone is thinking about with DEI, but it is looking at equity and inclusion and different income structures and different opportunities for services,” Pabich said. “If you look at the number of families receiving [free] lunches for schools, it’s very significant, especially in the Sturgeon Bay area. We’re doing fantastic with tourism, but then you learn about the people living in poverty.”

The number of families deemed “economically disadvantaged” by the Wisconsin Department of Education has increased steadily since 2015 in the Gibraltar, Southern Door and Sturgeon Bay school districts. For the 2020-21 school year, the percentage of Sturgeon Bay’s disadvantaged families surpassed 51% for the first time, qualifying the district for a high-poverty aid grant from the state.