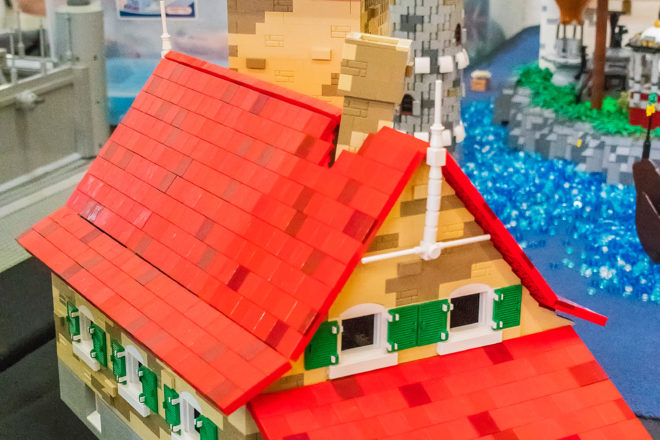 The Eagle Bluff Lighthouse was captured in LEGO bricks during the 2019 Brick Party by the Bay. Photo by Len Villano.

There’s something endlessly satisfying about LEGO, from the tactile sensation of placing brick after brick, to the sound each piece makes as it snaps into place.

Children as young as 18 months can start exercising their hand-eye coordination with DUPLO sets before graduating to LEGO proper at age four. From there, youngsters explore their imagination, of course, but they also learn art and design principles such as color theory and architectural design. Sets teach children about physics through axles and gears, and older children and teens can experiment with computer programming through LEGO Mindstorms.

But LEGO isn’t only for children.

On July 24 and 25, the return of Brick Party by the Bay will draw LEGO lovers of all ages to Sister Bay to celebrate amazing LEGO art and admire creations made by the Wisconsin LEGO Users Group (WisLUG). This group of Adult Fans of LEGO (AFOLs) meets monthly in Madison and Milwaukee as a way to connect with others who have a similar interest, work on group builds, compete in building competitions and more.

Although the term “AFOL” has been around since 1995, adults have been a growing sector of the LEGO market for decades. Recently, LEGO has released sets designated “18+” – and sporting sleak, collector-friendly black boxes – under a number of themes: a 9,036-piece re-creation of Rome’s Colosseum, for instance, or a 3,341-piece brick-built replica of Andy Warhol’s Marilyn Monroe portrait series. There are also Star Wars and Harry Potter products designed for adult collectors among the releases this year, including a series of Stormtrooper helmet busts and a massive version of Hogwarts.

The Brick Party by the Bay event is an opportunity for WisLUG AFOLs to showcase their work to a younger audience. Past exhibits have included Door County landmarks such as the Cana Island lighthouse and Al Johnson’s Swedish Restaurant. This year’s exhibit will include a LEGO train village and more.