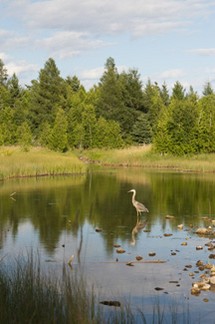 It was an occasion marked by words from the governor, and attended by politicians and environmentalists. But the importance of the latest two land acquisitions by the Door County Land Trust was best demonstrated when the crowds cleared and words ceased.

That’s when one could appreciate everything that the Kreuter property in Clay Banks and the Three Springs property in Liberty Grove are not. They are not waterfront McMansions. Not the sound of saws, earthmovers, traffic, or powerboats. And thanks to the combined efforts of several state stewardship organizations, they never will be. 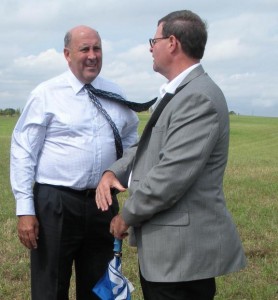 At the edge of a freshly harvested field overlooking the shores of Lake Michigan, the Door County Land Trust marked the purchase of a half mile of shoreline in a windswept ceremony attended by Governor Jim Doyle in Clay Banks. The Sept. 11 ceremony also recognized the recently completed acquisition of the Harold C. Wilson Three Springs property in Liberty Grove, which at 421 acres represents the largest land purchase for conservation purposes in Door County in over four decades. One has to go back to the purchase of 1,335 acres of Hotz family property to make way for Newport State Park in 1967 to find a larger example.

In his brief remarks Governor Doyle singled out the Land Trust for praise.

“The Land Trust movement in our state is really one of the great stories that’s happened in the last 20-25 years,” he said. “No other state has these pieces better in place.”

The Land Trust’s executive director, Dan Burke, called the properties two of “Door County and Wisconsin’s most scenic and important properties,” and credited the two properties’ longtime owners with making the occasion possible by caring for the land and eschewing development opportunities for decades. 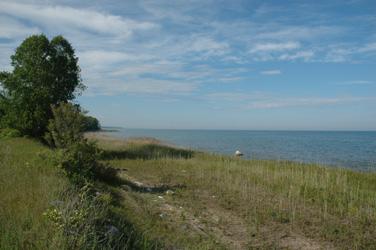 The Kreuter property features a half mile of shoreline. Photo by Myles Dannhausen Jr.

“They’ve been great stewards for many years, and we hope to continue their efforts,” Burke said. “We are able to purchase properties like this only because someone has maintained them.”

The Kreuter property includes 90 acres along the shore of Lake Michigan in Clay Banks, about 10 minutes outside of Sturgeon Bay. The land was sold in a bargain sale by Nancy and Susan Kreuter for $1,219,859, about half its appraised value. 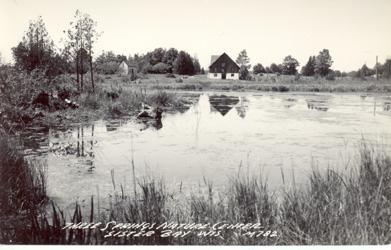 The Three Springs property as it appeared in the 1950s, when it was owned by Harold C. Wilson and run as a nature center. Contributed Photo.

The Three Springs property is the largest conservation project in the Land Trust’s history and was two decades in the making. George and Jean Reynolds have owned the property since 1970, and in the early 1980s began talking to the Nature Conservancy about putting it in preservation. Conversations continued in the ensuing years, until George Reynolds finally contacted Burke after the Land Trust dedicated the Ephraim Preserve at Anderson Pond in 2006.

“He contacted me not long after the dedication and said he was ready to do something and wanted to work with the Land Trust,” Burke recalled. The organization was happy to oblige.

In a statement the Reynolds’ said they are “delighted in the transfer of ownership of the Three Springs Nature Center to the Door County Land Trust, who will see to its preservation for the future.”

The Nature Conservancy did a biological inventory and wrote a federal grant to match the Knowles/ Nelson Stewardship Fund grant used to help buy the Three Springs property and donated $90,000 to the Land Trust for the purchase.

The Reynolds sold the property – appraised at nearly $3.4 million – in a bargain sale for $1.455 million, a total supplemented with a $746,000 grant from the stewardship fund and another grant of $471,750 from the United States Fish and Wildlife Service Coastal Wetlands program. That left the Land Trust to raise the remaining $405,000, of which they’re still seeking $56,000.

The tract includes 200 acres of wetlands and serves a critical role in the ecology of North Bay, a major breeding ground for the whitefish population of Lake Michigan. The area has the highest density of species in Wisconsin, and Burke said its white cedar forest provides a perfect habitat for migratory songbirds.

But the significance of the Three Springs’ property isn’t limited to ecological interests, as it has ties to some of Door County’s earliest settlers. First purchased by Franz Erickson in the late 1870s through the Homestead Act, it was later bought by Harold C. Wilson, of the Wilson’s Ice Cream family, in 1940.

It was on the Three Springs property that Wilson established one of the state’s first nature preserves, the Three Springs Nature Center, in 1947, where he displayed native Door County animals. In 1950 Wilson welcomed an intern from the University of Wisconsin-Madison by the name of C.C. “Buzz” Besadny. The young intern would go on to serve as head of the Wisconsin Department of Natural Resources from 1980 – 1993, and it was in that capacity that he was instrumental in establishing the Knowles Nelson Stewardship fund. It seems only fitting that the stewardship fund would eventually be an integral factor in preserving the land where he once served as an intern.

The Land Trust plans to build trails on both properties over the next year and they will be available to the public for hiking, photography, bird watching and hunting. The Land Trust has helped preserve over 4,000 acres on the peninsula since its founding in 1986.