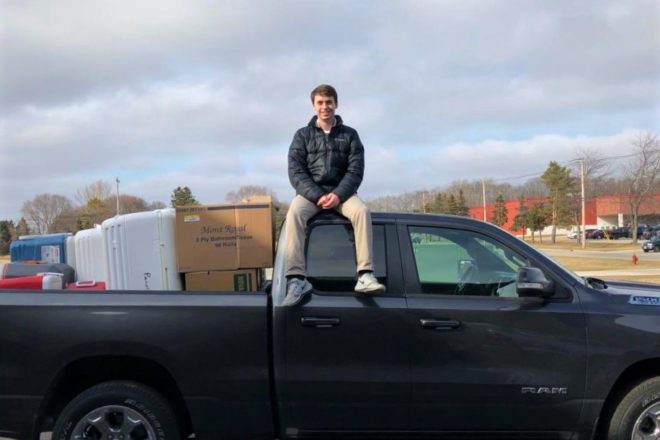 Adam Peronto, program director of the meal cooperative, sits on a truck getting ready to distribute the first day’s worth of supplies. Photo by Terry Lundahl.

On April 1 at 2:55 pm, 20 cars sat idling at the Sturgeon Bay YMCA, their occupants waiting to receive meals from the Door County Meals Cooperative. More trickled in by the minute.

At 3 pm, masked and gloved volunteers began handing out free meals through the passenger-side windows of each vehicle. Adam Peronto, exercise physiologist at the Door County Medical Center and the director of the operation, guessed they’d run out long before 5:30 pm, when they were scheduled to close up shop for the night.

He was right. Twenty-five minutes later, the cooperative had only 45 meals left out of its supply of 126 meals for that pickup location, which is one of six.

The Door County Meals Cooperative, which operates Monday through Friday, served at least 600 meals that day at six pickup sites set up in Door County and Algoma. Many organizations have combined forces to provide meals to anyone, regardless of age or circumstances, who is struggling during the COVID-19 health crisis.

“This isn’t just about feeding any kid or any family or anybody,” said Nicole Champeny, Boys & Girls Club director of programs and operations. “This program is about targeting the vulnerable people in our community who are vulnerable to the economic stress that the COVID-19 crisis is bringing on the community and the people who were already in the low-income brackets going into this.”

Lois Scoggin is one of those people. She’s known as the “mint lady” because she hands out mints during her trips to Piggly Wiggly, but now she’s not getting out much.

She lives in Bay View Terrace, an affordable-housing apartment complex across from the Sister Bay Fire Station. Her complex is outside of the six pickup sites, but Chris Hecht of the Door County Fire Chiefs Association has distributed extra meals this week to residents living in affordable-housing complexes such as hers.

“I’m not a cook,” Scoggin said, and the meal drops offer more than sustenance: The interaction with volunteers is one of her few social connections during the shutdown.

On Thursday, volunteer Anastasia Bell delivered a dinner of ham, steamed broccoli, soup and a carton of milk. As other volunteers delivered meals to other homes in the complex – a mother and her three children, an elderly man living alone – they shouted from the parking lot, “Hi, Lois!”

“I’m originally from Illinois,” she said. “I’m glad I don’t live there now. You wouldn’t find the amount of caring that you have here. The mentality is totally different. It’s not a fake thing; it’s really caring.”

The meal cooperative started coming together after Peronto approached the Boys & Girls Club, which had already been making and providing meals on a smaller scale since March 16.

Local school districts had also been preparing and distributing breakfast and lunch for their students since Gov. Evers announced his Safer at Home order. But someone needed to provide an evening meal, and Peronto’s goal in creating the cooperative was also to consolidate the organizations that were already providing meals into one resource, Champeny said.

The Boys & Girls Club has a working kitchen and a summer food program with the YMCA that provides up to 700 meals a day, a base in place to start production on a larger scale for the co-op once other organizations got involved.

During a normal day of the summer food program, it would take just two employees in the kitchen and a handful of other people to prepare and distribute 700 meals. Now the operation needs at least five times that many people to help with the more intense disinfecting and packaging, said Boys & Girls Club CEO Brian Stezenski-Williams. And as it is with the summer program, the organization’s in-house chef and nutritionist are planning healthful meals.

The Sturgeon Bay YMCA has been the busiest pickup site so far because of its location, said YMCA CEO Tom Beerntsen. Each site has a manager, and all six have a live text chat to keep all of the others updated on how much food is left and where to send people if one location runs out.

There is currently no limit on the number of meals that can be requested per car.

“We’re hoping to do it as long as there’s a need in our community,” Peronto said, “but ultimately there’s a finite amount of resources. We’re doing the best we can.”

The Emergency Response Fund set up by the United Way of Door County and the Door County Community Foundation has allocated some funds for food and packaging supplies for the cooperative. The fund has already made an initial contribution of $11,000. Peronto said community support has been overwhelming and inspiring.

Starting next week, the Baileys Harbor location will discontinue the pickup site at the sports complex and move it to Lakeshore Outfitters on Highway 57 instead, and a location at the Northern Door YMCA will be added.

In the meantime, the cooperative will continue to analyze the participant numbers to find the best ways in which to serve the community.