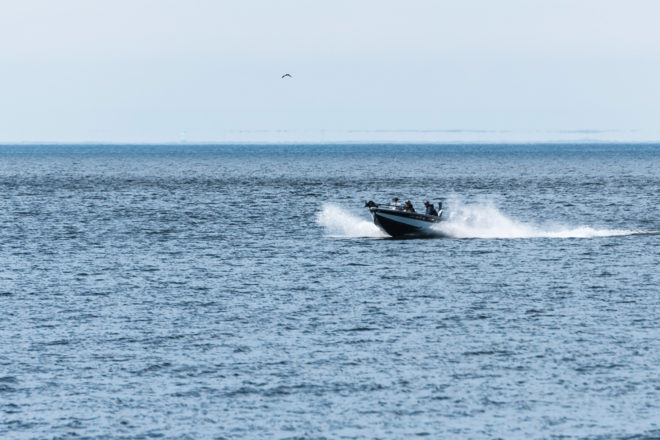 Last fall, Bassmaster held its Angler of the Year Championship in Sturgeon Bay, largely on the previous year’s rating of Door County as the nation’s top smallmouth bass fishery by Bassmaster magazine. That achievement, in turn, was due in no small part to the success of the Sturgeon Bay Open Bass Tournament (SBOBT), according to Ken Ellis, the tournament’s director and board president.

In its 26th year, the tournament’s reputation has steadily grown along with the size of the smallmouth bass being caught in its annual spring and fall tournaments.

Ellis points to 1995 as the turning point for the tournament when national brands like Champion boats (now part of Ranger), Mercury motors, and major tackle manufacturers signed on as sponsors and prize money reached six figures. With their promotion, word spread quickly. 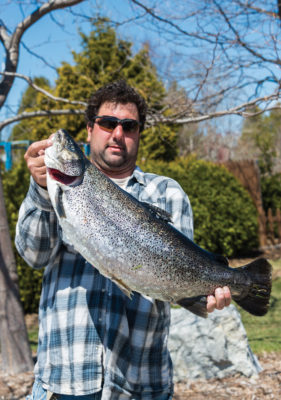 In 2001 the SBOBT reached its high-water mark with 243 teams competing and the catch reaching 2,400 pounds. Since 2006, the tournament has been capped at a more manageable 200 teams. The prize packages continue to be substantial — first place winner receives a Ranger bass boat with a Mercury motor and $10,000 cash — which draw the out-of-state anglers, along with the promise of big fish.

Besides Wisconsin, the tournament pulls in anglers from 11 other states and three Canadian provinces, all eyeing the payout but also the potential for near-record Smallmouth. Since it is an open tournament, anyone with a boat and tackle can fish it, says JJ Malvitz, the tournament’s public relations coordinator, noting that it regularly rates among the nation’s top three open bass tournaments.

When the contestants arrive for the spring tournament this year, which runs May 13 – 14, they will launch from a new location:  Wave Pointe Marina and Resort in Little Sturgeon Bay. The shift from the historic site in Sturgeon Bay’s Sawyer Park was driven by the logistical support being offered by Wave Pointe, a major tournament sponsor, says Malvitz.

The prospect of catching seven- and eight-pound bass from Sturgeon Bay and adjacent waters of Green Bay is the chief factor behind the area’s 2014 top national rating and its continued place among the top five Smallmouth Bass fisheries in the U.S.

“People are pulling in seven- and eight-pounders out of our waters right now and that was unheard of probably as recent as 10 years ago,” notes John Kolodziej, Door County’s highway commissioner and a contestant in the SBOBT since 1993.

Kolodziej, who has missed only one spring tournament in 23 years (due to his daughter’s college graduation), considers the variety of fishing terrain and conditions over the seasons to be a compelling advantage. “You can fish shallow in the spring. Fish tend to move out as the season goes on, so you have your opportunities out on the big parts of the lake with the humps and various reefs where you can do really good during the summertime,” says Kolodziej. “Then some of the deep water haunts and the deep edges you fish in the fall time as well. So it is just a great fishery.”

For Gary Nault, founder of the SBOBT along with his wife Cheryl, it is the combination of a great fishery with a top Midwest tourism destination that has put Sturgeon Bay on the bucket list of so many anglers. Door County’s wide assortment of restaurants, lodging, shopping and the arts are the frosting on a world-class fishery.

“If I had to rate the fisheries across the country that I have been to,” says Nault, “Sturgeon Bay would win hands down every single time.”

Their goals were relatively modest when they launched the tournament in 1991, says Nault. A new boat ramp had been built in Sturgeon Bay’s Sawyer Park and the Naults felt it deserved some publicity and celebration, as did the bay’s Smallmouth fishery.

“So we found some money and sent out some entry forms, and ended up with 24 boats,” he says. Over the next few years the number of contestants kept doubling, until it reached the point of being the Midwest’s largest bass tournament.

The Naults and their committee eventually registered the tournament as a not-for-profit corporation and began channeling the surplus funds to community projects, Wisconsin Department of Natural Resource programs, and scholarships to Door County students pursuing degrees in fisheries, forestry, wildlife and water resources.

They also wanted to give Door County businesses a boost by jumpstarting the tourist season by a few weeks. Over the years, local businesses have had their largest revenue during tournament weekends, adds Nault.

“That was the goal. It was never to make a profit,” says Nault. “It was to help out the community and showcase the fishing we had.”

That strong community bond has now led Nault and his wife to organize a new smallmouth tournament based at Sturgeon Bay’s Sawyer Park that will run May 20 – 21.

“It is going to start small and will get bigger as we did the last time,” he says. “We just couldn’t see Sturgeon Bay without a bass tournament.”

The addition of another bass tournament is not a problem for the SBOBT organizers.

“There is always room for another tournament and to showcase the fish of Door County,” says Malvitz. 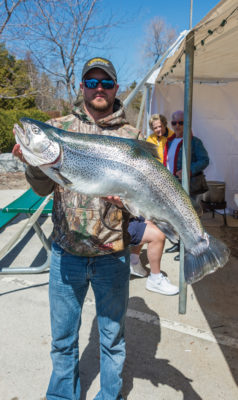 Over the years, the tournament has donated $250,000 to Door County communities and organizations. Malvitz estimates the tournament’s economic impact in Door County to be more than $8 million since its start. Just one to two weeks of tournament pre-fishing generates about $450,000 for area businesses, mainly restaurants, inns and gas stations.

Another benefit of the tournament, due to its longevity, is as a barometer for the health of the smallmouth fishery, Malvitz says. Charting the tournament catch and average fish weights from the ’90s through the mid-2000s shows a steady progression in the weight of the bass, from 2.5-pound average in 1991 to pushing five pounds the last few years, and a steady increase in the number of anglers.

“So it gives a good pulse of how the fishery is doing from both a biological standpoint and from being recognized as a destination,” says Malvitz.

Malvitz and others see it only getting better, and eventually topping the state record of 9.2 pounds.

“I think as things are going,” said Kolodziej, “it is probably going to come out of Green Bay waters, the Sturgeon Bay area, just simply because of the size of the fish we are seeing.”

Along with the SBOBT, the waters of Green Bay host several smaller bass tournaments and the March Walleye Battle on Green Bay ice fishing tournament. Salmon and trout are the focus on the peninsula’s lakeside, where the long-running Baileys Harbor Brown Trout Tournament ushers in the season on Lake Michigan in April.

Though dwarfed by the Kewaunee/Door County Salmon Tournament, which registers more than 2,900 contestants in July each year (scheduled July 23 – 31 this year), the Brown Trout tournament attracts a different breed of anglers, ones hooked on the promise and peril of fishing in below freezing weather, rough water and among broken ice floes in hopes of pulling in trophy trout pushing 30 pounds or more.

One of those stalwarts is Darren Collin, of Kaukauna, who has been fishing it since 1991 when he was eight years old with his uncle and father and now goes out with a band of friends and two or three boats.

He recalls the 2012 tournament as the most challenging, when northerly winds produced six to eight foot waves outside of Egg Harbor, his customary launch point. The wind and waves made any northern cruise futile so they ended up trolling all the way south to Sturgeon Bay. But their compensation was two fish in the top 10 weights that morning.

“A lot of times on the bay side, the rougher it is the better the Browns bite,” says Collin. “It is just a matter of what you can handle. It probably wasn’t the smartest decision we ever made, but we did it and we lived to talk about it.”

He continues to brave the weather partly out of nostalgia but largely due to the fishing challenge brown trout provide, similar in combativeness to salmon, and to having a stock of tasty trout in his freezer. Unlike the SBOBT, which is strictly catch and release, the Baileys Harbor tournament is catch and eat. Annual stocking of 126,000 brown trout by Wisconsin DNR ensures a decent catch.

A few years back though, the prospect of trophy Browns was dwindling, which Collin attributes to the DNR’s stocking locations near boat ramps in Sturgeon Bay and the Menominee River.

“Those two places in the spring are just full of big, giant walleyes,” he says. “They would plant these Brown Trout and they would just all get eaten by these walleyes.” Conditions have improved now that the DNR is stocking Browns in the middle of the bay, he notes.

Collin’s biggest tournament fish was around 16 pounds, about half the weight of the first place fish of 2012. He focuses his efforts on the bay side where the fish are bigger due to better forage. If the big fish prove elusive there he will try his luck on the lakeside at Rowleys Bay, Baileys Harbor and Sturgeon Bay. His preferred baits are ThunderSticks, Rapalas, and small spoons.

“We put a little mixture out every day and we let the Browns tell us what they want, and start adding more of that to the spread,” says Collin.

Prize money is lower for the Baileys Harbor tourney than the SBOBT — first place earns $600 in cash and a $1,500 Door County vacation package versus $41,000-plus for the SBOBT — but the entrance fee is more affordable, $25 versus the Sturgeon Bay spring tourney’s $510. Tournament structure is also looser:  contestants can fish on both the bay side and lake side, not only from boats, but also shorelines, docks and if need be, the ice. 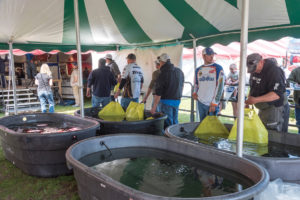 As Collin notes, wind and cold can be a winning combination. In 2012 with temps in the 20s and a 25-mile per hour wind raking the bay, the first and second place fish were at the weigh-in station by noon of the first morning, both registering within an ounce or two of 32 pounds.

While the Brown Trout tournament is overshadowed by the Smallmouth and salmon events, it gives anxious anglers their first opportunity to put boats and lines in the lake waters and a chance at prize money.

“Brown Trout fishing is the first kind of fishing that happens every year,” says Swanson. “It gives them something to look forward to after the winter.”

In January, her guys, as she calls them, are pestering her with emails about tournament plans and ice conditions, and the spring weather forecasts. If she has a change in mind for the tournament, she polls the anglers. Since most have been fishing it since the start, she trusts their judgment.

“They know more than I will ever know about fishing and the conditions. They want to feel like they are included in it. They want a say.”