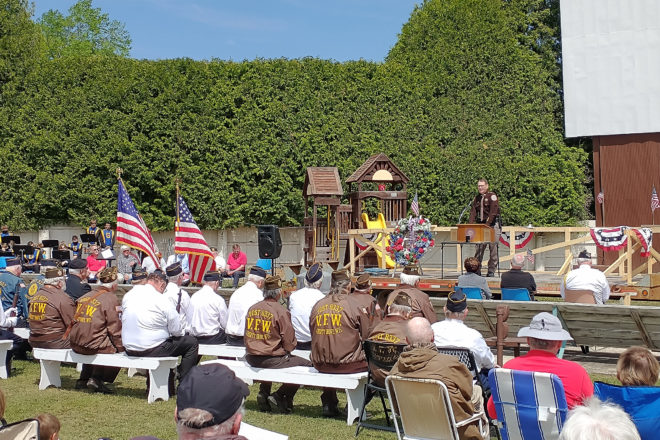 Those who organized these services and ceremonies thank in advance the people who attend to show their support, patriotism and respect for those who have served and died for their country.

Memorial Day services will be conducted at 9 am at Bayside Cemetery and 9:20 am at St. Joseph’s Cemetery.

The main ceremony will take place at 10 am at the Sturgeon Bay Fire Department, 421 Michigan St. Participants are asked to supply their own chairs if they arrive close to the start of the main ceremony because chairs will be limited.

If you have questions, contact Beth Wartella, Door County veterans services officer, at 920.746.2226.

American Legion Billy Weiss Post No. 527 of Sister Bay and VFW Post 8337 of Ellison Bay will honor deceased veterans during a 10:30 am ceremony at Little Sister Cemetery, beyond the south end of Sister Bay.

The ceremony will include music by the Gibraltar Band under the direction of veteran Charles Eckhardt, “Taps” by Dale Seaquist and “God Bless America” by Regina McIntosh. Fr. Tom Farrell of Stella Maris Catholic Parish will deliver the invocation and benediction; Boy Scout Troop 1120 will deliver the Pledge of Allegiance; and veteran Michael McCarty will be the guest speaker.

The American Legion and VFW Posts will honor deceased veterans, with Commander Tom Kowalski as the master of ceremonies.

Please take your own chair. In case of inclement weather, the ceremony will move inside at First Baptist Church, 2622 S. Bay Shore Dr. (Hwy 42) in Sister Bay.

Beginning at 6:30 am and leaving from Legion Hall in Algoma, 94 Clark St., the Honor Guard will travel to seven area cemeteries for a short memorial service, including firing a salute and the playing of “Taps.”

Following the services, all area veterans and their families are invited to breakfast at Legion Hall, provided by the Knights of Columbus. Please sign up for the breakfast by calling 920.255.0874.

The Memorial Day Parade will start at 10 am, leaving from the Algoma City Hall and traveling through downtown Algoma, ending at Legion Park. A Memorial Day ceremony will follow, featuring music by the Algoma Middle and High School Bands, as well as remarks from student speaker Julia Vandervest, recipient of this year’s scholarship. Liz Melotte will sing the national anthem, and the Honor Guard will end the ceremonies by firing a salute and playing “Taps.”