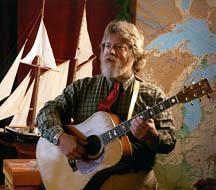 The history of the Great Lakes shimmers with images of hard-working men and women, their tragedies, adventures, successes and failures. Performing in the second Door Community Auditorium Fireside Coffeehouse Concert on Saturday, January 31 at 7 pm, Lee Murdock will recreate this amazing history in vivid detail, bringing those hardy souls to life once again.

Murdock’s musical career began in the Chicago area more than 30 years ago. From an early repertoire in blues and popular music, his interests expanded to include folk music and the maritime tradition. What he discovered was a wealth of songs and stories about the Great Lakes, a virtually hidden treasure.

In musical arrangements of new and traditional folk ballads, chanteys, and work songs, Murdock educates as well as entertains his audiences with the history and traditions of the Great Lakes. Based on historical documentation, Murdoch combines research and contemporary insights into a body of work that creates a virtual musical documentary.

Seating for the Fireside Coffeehouse Concerts is limited and advance ticket purchase is strongly recommended. General admission tickets are $14 and are available at the Door Community Auditorium box office, by phone (920.868.2728), or via the http://www.dcauditorium.org. Refreshments will be available for purchase during this performance.