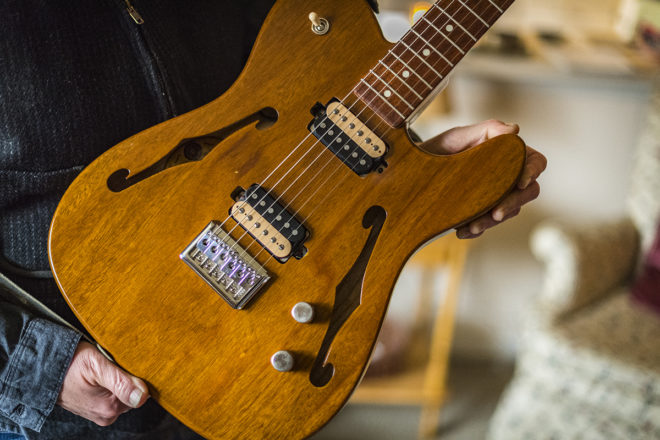 We asked some of Door County’s best-known musicians: if you had to pick just one instrument from your collection to play, which would it be?

“The wood comes from Palmer Johnson’s and it’s custom made by Tony Louscher in Green Bay. There’s only about four or five of these bad boys. A friend of mine who I’ve known for a while, her and her boyfriend are music lovers and they like my music and they like me and they surprised me with it. It was a gift. It’s a totally different beast from an acoustic. I used to have bands in New York and this guitar really makes me want to have a band.” 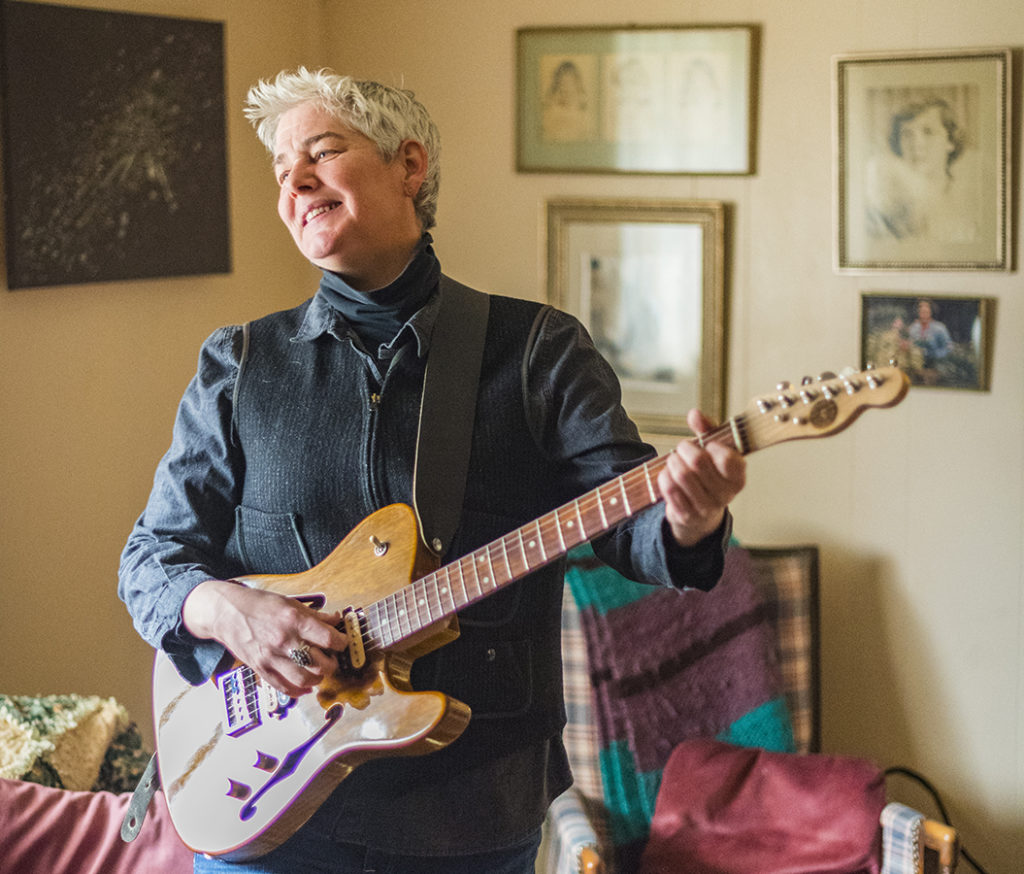 “It’s so versatile. It’s got a USB port that I can connect to my computer and then get any variation, even open tunings, Les Paul sound, banjo, dobro, steel guitar, just about anything you want. What I use it for mostly is for open tunings because you have to have a couple of different guitars for an open tuning. I don’t really have to carry five guitars to do what this thing does very easily. I’m kind of a purist when it comes to sound. If it were a question of sound quality, if the programs weren’t really cracked up to all that they should be, I probably wouldn’t use it. It’s just really a versatile guitar.” 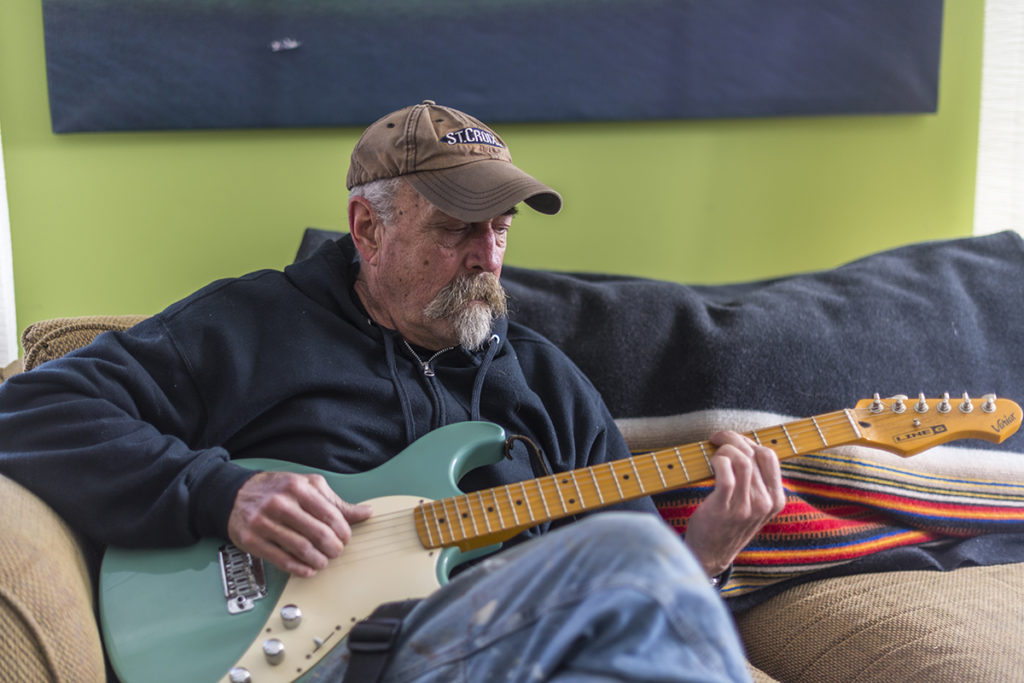 “I was at a family reunion and my brother’s brother-in-law collects guitars but he doesn’t play guitar. I was just sitting there going, ‘I don’t really like the guitar I have and this guy has 40 guitars.’ My brother Dave, who lives in San Francisco, said he was coming out for my birthday. He said we should go to Appleton and have sushi. Then he said we should go over to the guitar store and I thought, ‘Oh I don’t want to torture myself.’ The manager walks in and gets a chair and tells me to sit down. I tell him I’m not really going to buy a guitar today and my brother said, ‘Yes you are. Whichever one you want.’ I’m really a folksinger. I’m not a great guitarist. But I can’t write songs without this.” 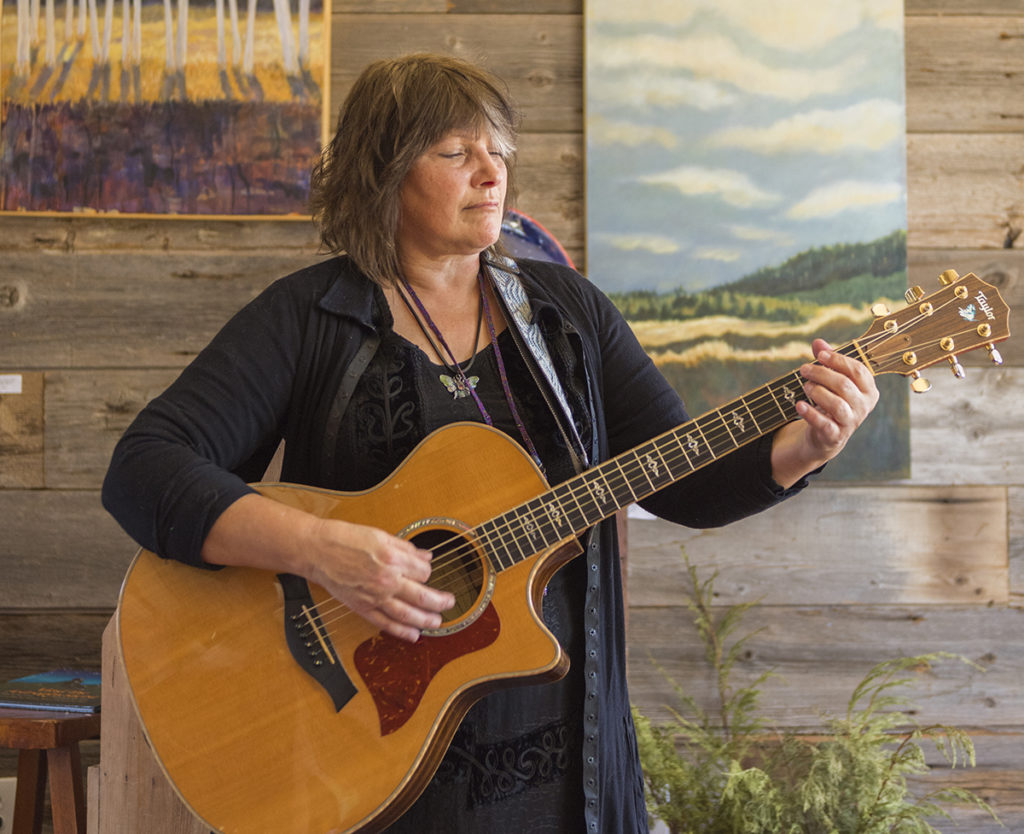 “It’s made by Yamaha and it’s designed to fit in the overhead of an airplane so you can take it onboard with you…If you take a real cello on a plane, they don’t fit anywhere and you don’t want to check them below because they just get beaten…All of the essential parts of the instrument are here. It’s an amazing design. If you’re going to amplify it, this gives a much cleaner signal. It’s really hard to get an acoustic cello nice and hot and loud and rich and full without bitey, high-end. They’re just not designed for it and they’re hollow so they feed back really easy. This, you can really get this thing cranked and you’re not going to have any feedback issues. It’s a rock instrument.” 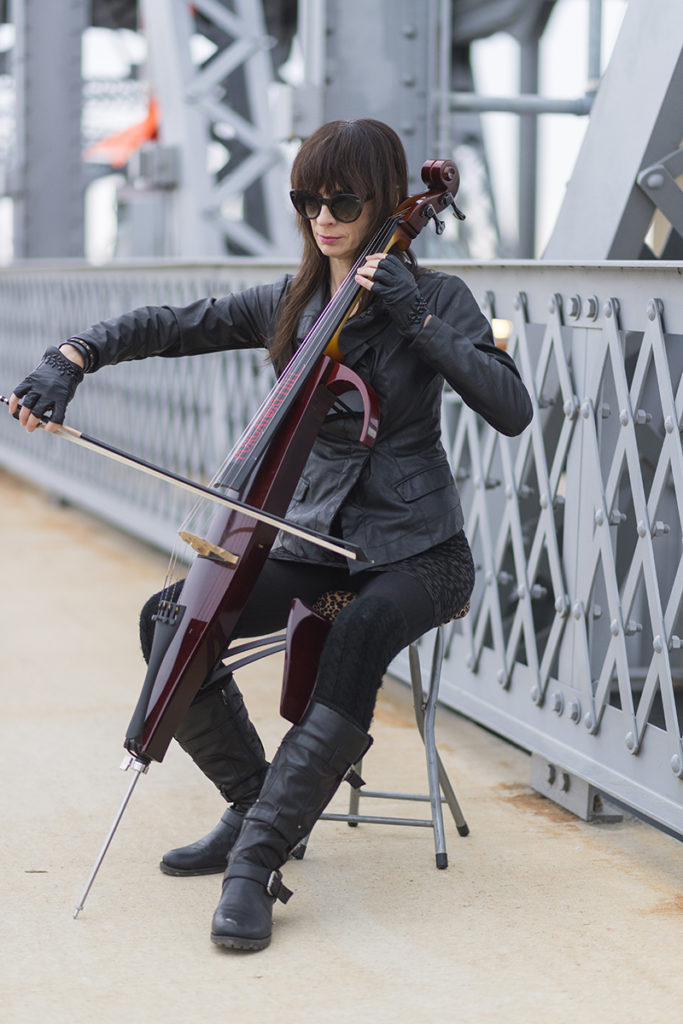 “It was given to me as a gift and at the time he (creator Johnny “Lowebow” Lowe) was making these and he was charging a minimum of $500 for them and it looks like a cheap little thing but if you kind of examine it, it’s got the most amazing craftsmanship in it. These are wonderful pickups, they work really great and he winds them himself. It’s like a sewing machine spool, like a metal spool wound with really fine copper wire, many, many, many winds. He winds them with a sewing machine…It’s got a bass string which is really great to have on a guitar and it’s got three guitar strings. I like bass guitar and I like regular guitar and this really has all the frequencies from really low to really high and you play it with a slide…the low one is really thunderous live because it’s an electric instrument.” 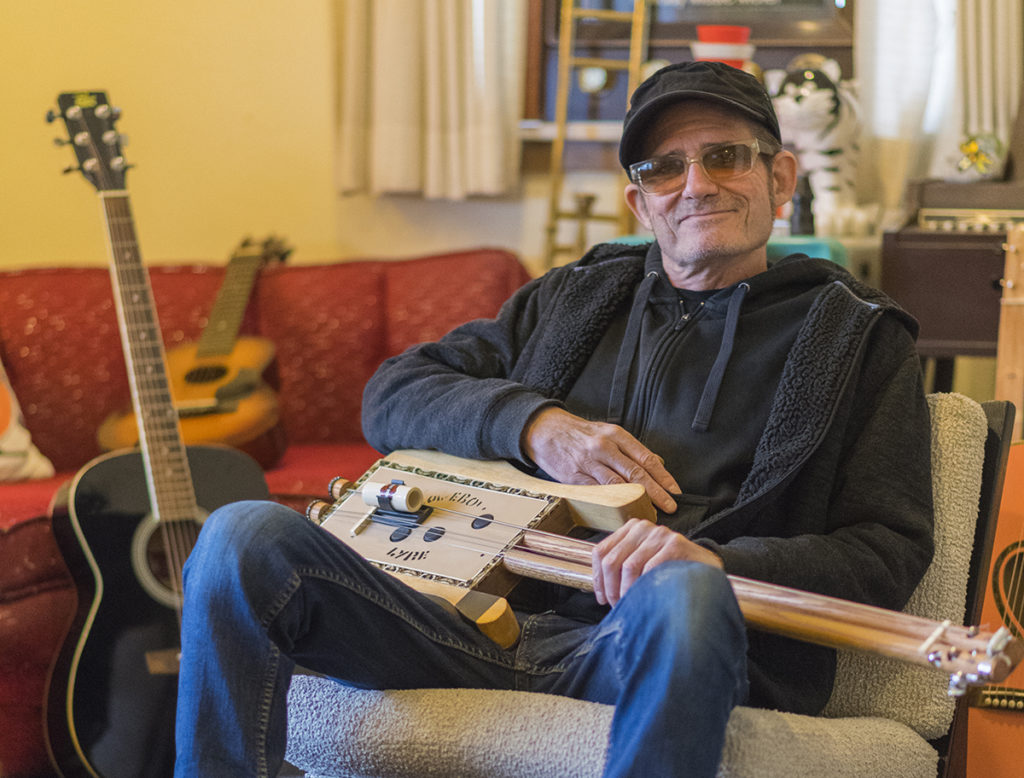 “It’s built for washing clothes. I met this guy, Mike Eamons, a finger style guitar player, at the Bayside open mic back in 1992. I played the congas at the open mic and he said, ‘Ever think about getting a washboard?’ I went to Jungwirth’s in Sister Bay and bought this. For years it still had the price tag on it. It was like $7.98. It just comes through a tradition of making instruments from just what you have around.” 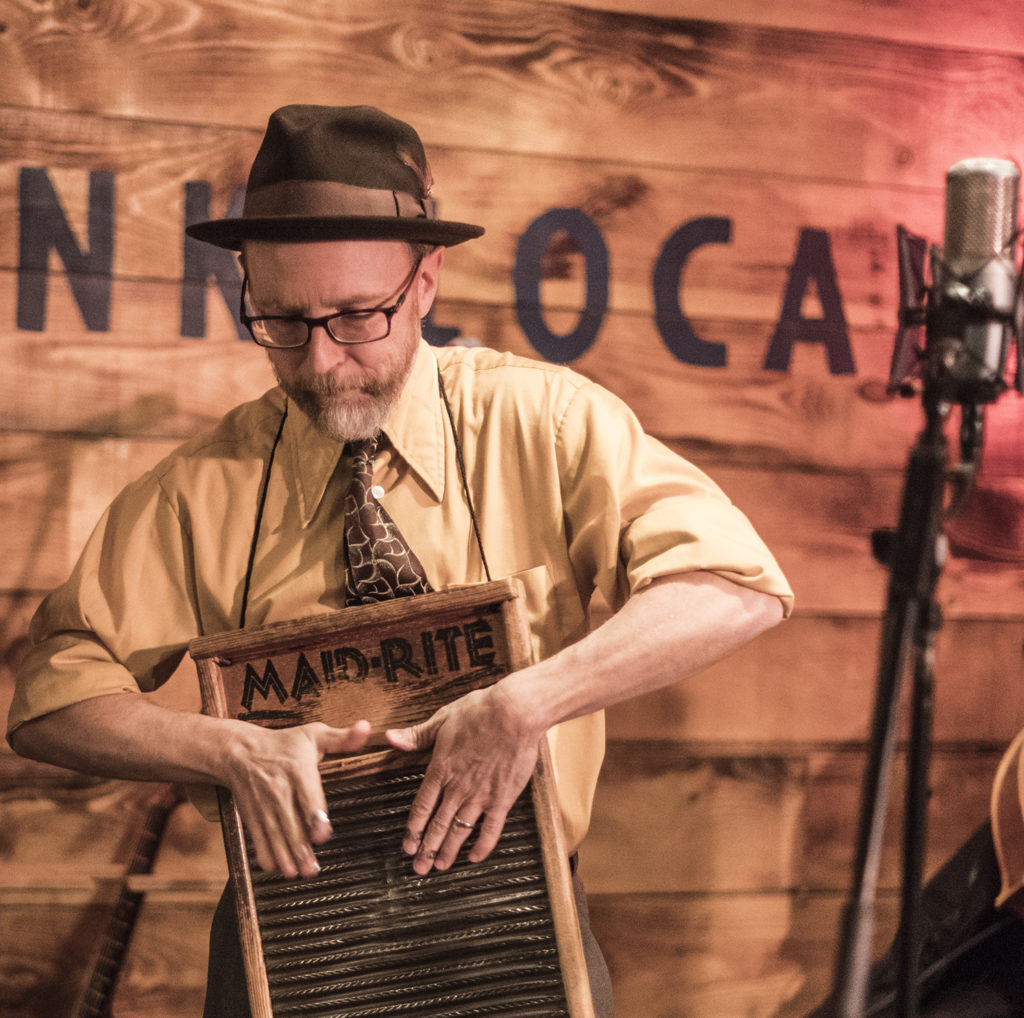