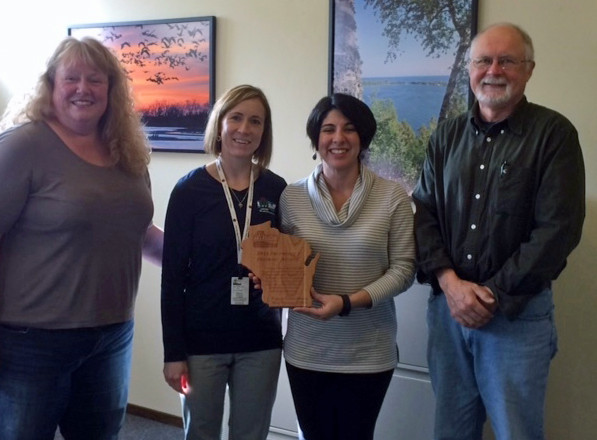 The staff at The Nature Conservancy in Door County has been honored by the Department of Natural Resources for helping restore Northern Pike habitat in tributaries and ditches connected to the waters of Green Bay.

Each spring, Northern Pike make their way far upstream and up water-filled ditches along Green Bay’s west shore to spawn in wooded wetlands, such as the Sensiba wetlands near Suamico in Brown County.

The Door County Nature Conservancy, DNR, and other conservation organizations have improved connectivity of waterways and the quality of inland wetland sites where pike spawn. The conservancy staff successfully applied for grants that funded the creation of an online tool for streams that flow into Green Bay, allowing users to identify barriers to fish passage. Subsequently, The Nature Conservancy assisted in funding the replacement of culverts that were in poor condition or incorrectly placed.

“The natural resources of Wisconsin benefit from partnerships like the one DNR has with the Nature Conservancy,” said Romback-Bartels. “This award was presented to bring attention to the work being done by the Nature Conservancy in fish passage and Northern Pike habitat improvement and to express our gratitude for the efforts of these committed and visionary conservationists.”