For a small city, Sturgeon Bay certainly drums up its share of controversy and argument.

With the bridge battles calming, Egg Harbor Road at least passable, and construction dust settling, city residents are now immersed in the battle to find which way is right for downtown streets. 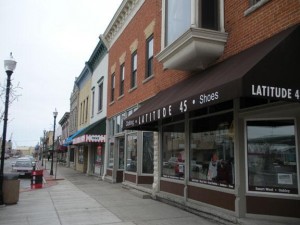 DC Bikes on 3rd Avenue in Sturgeon Bay has closed.

Many merchants want the city to make 3rd Avenue a two-way corridor. The idea gained steam with the closing of the Michigan Street Bridge and opening of the new bridge on Oregon Street in September.

“It’s really difficult for people to get to our business,” said Tom Parsons, who owns DC Bikes and Latitude 45 on the corner of 3rd and Michigan Street. “They’ll go to 4th Avenue and not know how to get to our store. We estimate that up to 50 percent of tourists never come down 3rd Avenue, and I feel that we lose up to 25 percent of our potential business because they don’t have easy access to our store.”

Parsons said the problem has always existed, but the switch to the new bridge made it worse. After the Common Council voted not to pursue the switch Feb. 3, Parsons closed the doors of his store, for good, he said. 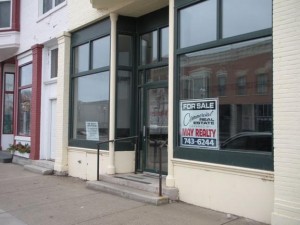 Empty store fronts and For Sale signs are more common every day in Sturgeon Bay.

“There are a lot of businesses thinking of calling it quits because of the two-way issue,” Parsons said. “If you don’t direct traffic through your tourist district, you obviously don’t want to be a tourist destination.”

Bill Parsons, Tom Parsons’ father and business partner is a longtime resident who graduated from Sturgeon Bay High School in the 1950s. He said visitors find the downtown configuration confusing.

“When you’ve been here forever you’re pretty comfortable getting around,” he said. “But this is about the people who aren’t from here.”

Traffic moving north over the Maple to Oregon Street Bridge is currently directed by signs that read “42/57 Business District” directing them around 3rd Avenue. If a visitor follows the city’s signage, they’ll never drive through the city’s historic 3rd Avenue shopping district.

City Engineer Tony Depies doesn’t support a switch to two-ways. He said it would cost at least $335,000 to do (including adding two stop lights, removing a couple of bump-outs, and new painting and signage) and may not create economic returns for merchants. He said proposals to switch traffic flows on other streets would just move the problems. 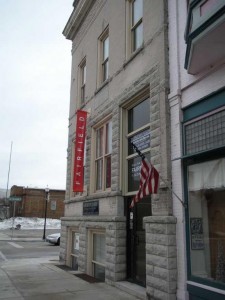 The Fairfield will close in March.

Depies said the city erred in not having better signage ready to go when the bridges switched.

“I certainly believe directional signage is something that can be improved,” he said, but added that it must be guided by business owners, not designed by the city.

Mitch Larson owns the On Deck clothing store at the corner of Jefferson and 3rd Avenue. His store benefits because every visitor who follows the one-way loop and does make their way to 3rd must pass in front of his store.

“I think it should remain one-way because it’s the most efficient way to get people in and around town,” Larson said. “Once they get the signage, it will be the best way.”

Larson said he bought his store three years ago in part because of the traffic configuration.

“I would never have bought it if I knew the directions would change,” he said.

He acknowledged that the current signage is “absolutely horrible,” and supports the idea of extending 4th Avenue to create a circular loop. Larson sympathizes with struggling business owners, but attributes problems to the national economic downturn, not one-way streets. He pointed to other positive developments on the way.

“We have to get the Michigan Street Bridge open, get the full impact of the room tax dollars, and better signage directing people to 3rd,” he said. “Plus, we just got the four-lane highway open. All of those are what’s going to bring the city back.”

“A number of businesses are hanging on by a thread,” Ullmann said.

“I think the downtown is in distress, and if we do what we’ve always done we’re going to get what we always got,” he said. “I can’t for the life of me understand why we wouldn’t give it a shot.”

Michaud said the city went to one-way streets in the 1970s because they only had one bridge at the time, but now that pressure is gone.

Depies disagreed that changing the traffic pattern is the solution

“I’m of the opinion that 3rd Avenue has grown into our healthiest business district with one-way traffic,” he said.

Like Michaud, Bill Parsons, said the reasons not to try a change are unconvincing.

“The only negative is that it slows down traffic, but that’s what businesses need,” he said. He thinks the switch can be done with four-way stops rather than streetlights. “Congestion says to people, this is a popular place. The original idea was to get people in and out of here as soon as possible. At the time there wasn’t much tourism in Sturgeon Bay. Now the shops are increasingly tourism-dependent.”

Bill Parsons said the goal should not be to get people through the city as quickly as possible, but to get them to stay there and spend money.

“One-way streets are efficient but they are not customer friendly for people coming downtown to shop two or three times a month,” said a report submitted by the Planning and Design Institute commissioned by the city. It recommended a switch to two–way streets.

Bill Parsons says the ramifications of the status quo go beyond tourism-dependent businesses. Lose the businesses, and property values go down, and with them, tax revenues and jobs.

“When you talk about the downtown, all these places are interrelated,” he said. “Locally owned businesses support local people and business. The money stays here.”